All change - The departure of Hugh Cornwell 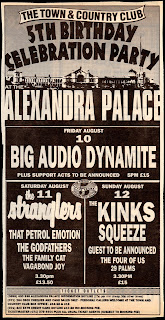 I was not at the gig at Ally Pally which was to prove to be the last time that the classic line up would play together. That weekend, my brother-in-law got married in Whitehaven, Cumbria (almost the greatest distance that one can get from London whilst remaining within our borders!). Whilst Hugh was belting out the last Stranglers tunes that he would play for the next ten years, I was being 'entertained' by a septuagenarian covers combo playing 'Lady in Red'! 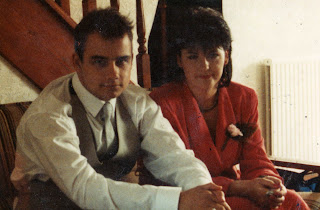 With hindsight I have no regrets whatsoever about missing this gig, regardless of its significance. People that were in attendance have long confirmed that as a swan song performance, this was no way to bow out. Perhaps Hugh was distracted, having made such a big decision, but this show did not reflect the excellent gigs from the '10' tour earlier in the year.

Hugh's last gig was on a Saturday night and from memory the news of the departure broke, either officially or non-officially within about two weeks. At the time I was working at the British Gas London Research Station in Fulham. On the day of this revelation any work plans went out of the window a national state of emergency was declared as in my head! Many calls were made until the the situation was verified.

In the days that followed, the discussions switched to the future of the band.... would the band call it a day, if they did decide to continue, would it be under the same name or something new?

The intention of the remaining members to carry on was confirmed in a quote from JJ in the music press reportage of Hugh's leaving. Another avenue of speculation then.... who's the new guy to be? I recall a number of rumoured candidates from Dave Vanian, Ian Dury, Ian McNabb and the singer from Johnny Hates Jazz. There was some degree of truth in some of the rumours, for some of the others I am not so sure. 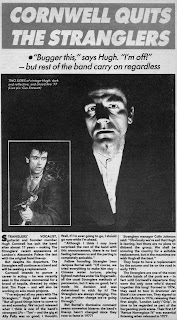 So concerned was I about the future of the band that I felt compelled to write to the bass player. What for I do not really know, a little bit of reassurance I suppose. The possible demise of The Stranglers posed a very great threat to my relatively recently established social life involving the band.

JJ had the courtesy to reply (as always in my experience) stating his vocal concerns. I do not suppose that this was an indication of the loss of confidence in his vocal abilities that he experienced later. His singing was on top form at this point, remember, the excellent 'Un Jour Parfait' was little over a year old. 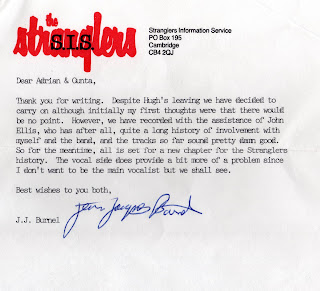 With this minimal reassurance, my confidence of a bright future for the band took a further knock with the band's unconvincing performance on Youth TV's enfante terrible, The Word. For those who don't know, The Word was a chaotic, post-pub, magazine show that ran on The UK's Channel 4 from 1990 to 1995. In my opinion, this was a poor choice of platform for a Stranglers live TV appearance..... but I'll let you decide.