There's not too many good examples from this period, the second leg of the La Folie tour. The best unofficial recording that I have is this one which was released as a bootleg in the early 80's as 'The Men They Love to Hate' LP. Good sound, but unfortunately not the full set. Those looking for the best quality recording from this tour should seek out the BBC archive album 'Live at the Hammersmith Odeon 1981'. The title is misleading as this album was recorded at the venue on 8th February 1982. The La Folie gig sets were great, featuring as they did several tracks from the massively underated album of the same title. As of 2011, 'Tramp' has reappeared in the set, but we continue to wait on other tracks to be revisited (please note, I am ignoring the omnipresent 'Golden Brown' here). 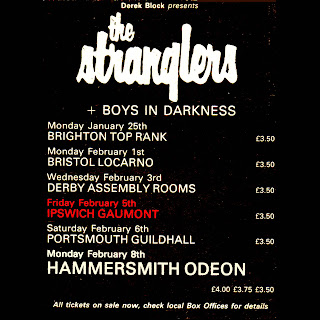 Email ThisBlogThis!Share to TwitterShare to FacebookShare to Pinterest
Labels: 1982, The Stranglers