Another post on a recently read book, once again music related so not a complete indulgence.

As pointed out in the preface by the author, the story of Adam and the Ants is really the story of two bands. Like me, the author expresses frustration at the fact that to state that you were a fan of Adam and the Ants would instantly invite 'Dandy Highwaymen' and 'Prince Charming' taunts, but it wasn't always like that, far from it! The Ants of Matthew Ashman, Dave Barbe, Andy Warren and Adam, along with various other early ants that served, were a different proposition altogether from the chart friendly pop act that rubbed shoulders with royalty. The Ants of 1977 to 1979 were a cult band who drew around them a hardcore band of young fans who followed the band to whichever run down clubs and colleges they played at.
The bands focus on sadomasochism, bondage and the like ('Whip In My Valise', 'Rubber Room', 'Beat My Guest', 'Bathroom Function' etc etc) coupled with songs touching on fascist themes, albeit in a tongue in cheek manner ('Nietzsche Baby', 'Deutscher Girls', 'Il Duce'....) did little to endear the band to the all important British music press. So in this most interesting period of the band's existence they did not get the media attention that made many of their contemporaries.
What is notable about the early Ants is just how prolific they were. Whilst official releases were slow in coming (first single 'Young Parisians' was released in October 1978 whist their first studio album, 'Dirk Wears White Sox', only saw the light of day in November 1979) the band produced a veritable treasure trove of material in demo form, songs that made up their live sets in 1977 and 1978.
Now I love 'Dirk Wears White Sox'. It is quirky, highly original and very stylish and yet much of the demo material was even better. As I have mentioned on this site before, Adam recorded some of these early songs with Marco and they became B-sides to many of the big hits that came a little later. But how I would live to hear proper, fully fledged versions of these songs as recorded by the original band!
Many years ago and for a period of a few months I used to cross paths with Tony Barber (then of Buzzcocks) in Camden. He recorded yet another permutation of the demos for me and we discussed the Ants. He said that any outing to see the band, especially outside of London, always had the potential for violence. This observation is borne out in Johna's book. Written in the style of a novel, it focusses on the early Ants as viewed through the eyes of the small yet devoted fanbase. The euphoria, danger and overall sense of belonging to a tribe inextricably linked to one band jumps off the page and into the imagination of the reader.
Individual gigs are described in detail. The author clearly also has access to the 45 year old recordings of these gigs as the set lists are accurately described in the narrative.
Sadly, whilst this era of the band is quite well represented in bootleg form, not all of the gigs described in the book have survived in audio form, if ever they were recorded in the first place (probably not). I can however, correlate some of them. One of those is an eventful evening spent in Salisbury Technical College on 21st September 1978. As was usual fans of the band converged on the Wiltshire city for the gig, but tonight in fewer numbers that usual it seems. Unfortunately for this travelling contingent, the Ants appearance coincided with a biker's rally. The potential for trouble, high at the best of times, looked like an inevitability on this evening... and so it was. Bikers and local anti-punk thugs gained access to to the hall and started picking off the outnumbered fans.
Listening back to the gig today, I was wondering whether any reference  to the situation would be made from the stage, but it seems not. The recoding sounds ok when you consider i) its age and ii) the circumstances under which it was recorded.
Trouble continued after the band left the stage. What followed sounds like a mini Dunkirk operation. As drunken bikers patrolled the area around the college looking for hapless punks to beat, fans were piled into the band's transit and the van carrying the PA and a getaway for many was pulled off . Other gaggles of fans ran the gauntlet upon leaving the venue including Johna and his mates who faced a 30 minute wait for an AA man to rescue their broken down hire car from the car park ahead of a long tow back to Bradford.
So here is the gig. The artwork states the 22nd of September but what the hell! A memorable gig for all the wrong reasons. Johna states that this is the only time that the band played 'Song for Ruth Ellis' live. 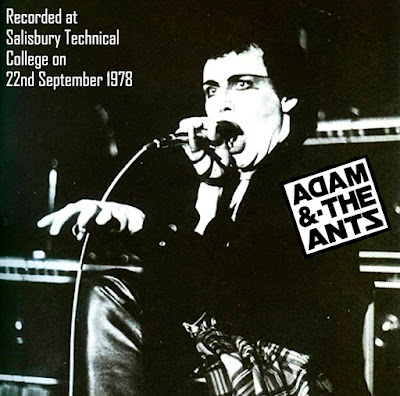 Email ThisBlogThis!Share to TwitterShare to FacebookShare to Pinterest
Labels: 1978, Adam and the Ants