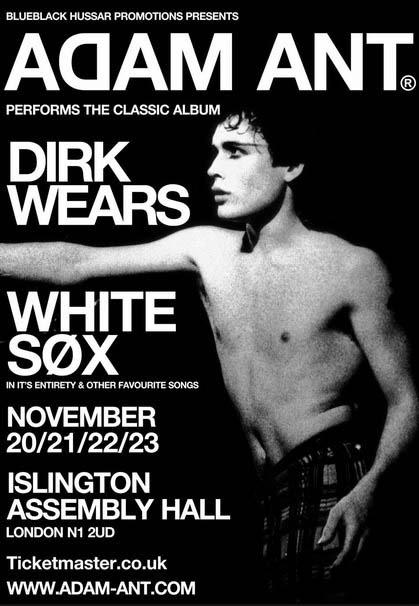 Finally, this was my chance to see Adam Ant play the brilliant 'Dirk Wears White Sox' album. I had tickets back in April to see the performance at  the Hammersmith Odeon/Apollo (or what ever the hell name it goes by this month), but it clashed with the Wonky Bus dates so something had to give, and on this particular occasion it was Adam. But hey, this was much better, rather than see him do it in Hammersmith (which in my own opinion is one of the most sterile venues in London, not to mention a pig to get to for me) these dates were to be played in the small Islington Assembly Hall which forms part of the Town Hall.

I have seen Adam play on and off for the past 33 years. In fact that would definitely tend towards the 'off' end of the scale as in this period I have only seen him three times, in 1981, 1995 and now in 2014. 1982 could have been added to that list as through the Bivouac fan club I was allocated a ticket for his first solo gig following the disbanding of the Ants..... but my parents wouldn't let me go!

First time around it was on the Prince Charming Review when Adam Ant was a fully fledged rock star. As a 12 year old at the time, I thought the album was OK, but pretty tepid in comparison with 1980's 'Kings Of The Wild Frontier' (which was the first album I bought off my own back). What was good about the Prince Charming period was the B-sides of the big hit singles for which Adam and Marco delved deep into Adam's Ants past and rerecorded tracks that earlier incarnations of the band had recorded several years earlier. In this way, such tracks as 'Christian D'oir' (b/w Prince Charming), 'Beat My Guest' (b/w Stand and Deliver) and 'Friends' (b/w Ant Rap) first came to my attention. This was a trend that the two solo Ants continued after the break up with the likes of 'Red Scab' (b/w Goody Two Shoes) and 'Juanito The Bandito (b/w Friend Or Foe). Even to my young mind, these B-sides made more of an impression on me than the big hits.... and I was oblivious to the fact that they were old songs.

Thereafter it was a case of working backwards. Upon the shock announcement that Adam was culling the Ants, a series of early recordings were released in order to milk the final pint from the cash cow that was Adam and the Ants before Adam himself potentially sank in the choppy and fickle sea of teenage pop fandom.

'Deutscher Girls'/'Plastic Surgery' from Derek Jarman's unfathomable punk film 'Jubilee' was released as was a collection of early Ants recordings on the 'Ant Music E.P.'. Prior to this and in parallel with getting 'Kings' and 'Prince Charming' I was busy acquiring the early pre-Marco singles..... 'Zerox', 'Cartrouble' etc. Then 'Dirk Wears White Sox' came my way, probably in early 1982.

Towards the end of the lifetime of the Ants, my musical allegiance was switching from Adam and Toyah to The Stranglers and The Damned (Gary Numan and Tubeway Army were also well in the mix at this point). It was only when I went to Uxbridge in 1988 that friends introduced me to the mass of material that pre-dated the 'Dirk' album (and incidentally was the source of all of those all important re-recorded B-sides). On cassettes I heard a plethora of demos 'Madam Stan', 'Decca' etc. With tastes that had matured somewhat it became apparent to me that the best material that Adam and the Ants produced pre-dated even 'Dirk' (as great as that was) and with the exception of those B-sides the majority of it had never seen the light of day.

Switch to the present day, or yesterday in fact and the gig.

Adam and his band ran through the 'Dirk Wears White Sox' album in its entirety and I was transformed back to my bedroom 30 years ago. I can't believe that it was all reproduced so well, These songs can be best described as quirky, but the band did a magnificent job on it, especially with the falsetto harmonies that feature frequently across the album. Personal favourites of 'Nine Plan Failed' and 'The Day I Met God' were clear highlights, as was 'Zerox'.

Part of the show was given over to acoustic performances of S.E.X. and 'Picasso (Visita El Planeta De Los Simios)'. A nod was given to the direction that the Ants took after Malcolm McLaren took the first band when Adam played 'Kings of the Wild Frontier' and 'Dog Eat Dog'. Aside from that only a cover of Dave Berry's 'Strange Effect' and possibly a new song took the set beyond the 1970's Antz. This was manna from heaven for me... a perfect 1979 time capsule and yet sounding completely contemporary.

And finally, a treat in the form of the wonderful 'Bathroom Function'!