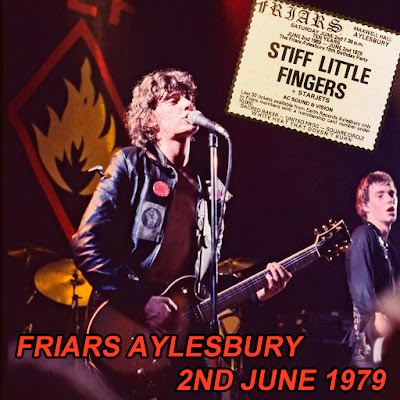 Imagine this, SLF's gig at the famed Friars venue in Aylesbury as a part of the venue's 10th anniversary celebrations was the bands third appearance there in just eight months! This set is obviously centred on the debut album 'Inflammable Material' (released in the UK in 2nd February 1979, the day before the band's second appearance at Friars). Even 'Closed Groove' is in the set, along with one of the to be expected 'silly encores', here in the form of Mud's 'Tiger Feet'.
WAV: https://we.tl/t-cKtKmBbhH6
Artwork: https://we.tl/t-AfHiRQbvDU
01. Alternative Ulster
02. Closed Groove
03. No More Of That
04. Straw Dogs
05. Breakout
06. State Of Emergency
07. Barbed Wire Love
08. Wait And See
09. Here We Are Nowhere
10. Law And Order
11. Gotta Getaway
12. Johnny Was
13. Wasted Life
14. Tiger Feet
15. 78 RPM
16. Suspect Device
Posted by Musky03 at 13:03