Stiff Little Fingers - Going For It Again in 1987

It was sometime in the Autumn of 1987, midweek. I had spent part of the morning in the dentist's chair having a rare filling. Job done, I called by WH Smith's to pick up this week's 'Sounds', my music paper of choice at that time. Once back home, over a cautious cup of tea (I was still numb from the dentist's attentions) I sat down to thumb through the paper.... only to jump up again in disbelief. There on page 3, in black and white, an announcement.... Stiff Little Fingers to Go For It Again in a series of gigs scheduled for the end of the year. This was completely unexpected, I was going to get to see SLF! 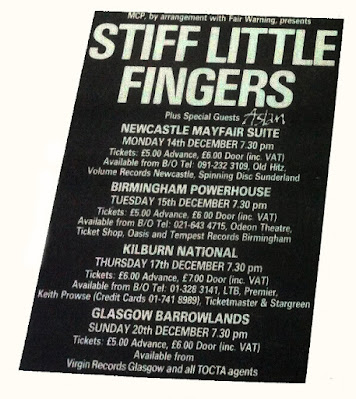 There was only one obstacle that needed to be overcome here..... parental protest. This wasn't a real life 'At The Edge' situation. This was to be expected and to be fair it wasn't altogether unreasonable on their part. In the summer, I had royally fucked up my 'A' levels and was at that time in the process of relearning stuff to take a resit of the Chemistry 'A' level in London. And here was the rub. The Chemistry practical exam was scheduled for 9 am on 18th December in Bloomsbury in Central London whilst SLF were to play at the Kilburn National on 17th December. Living at the time in Mid-Sussex, London gigs were possible provided that you were prepared to forego a night's sleep! The midnight train out of Victoria only stopped at Haywards Heath and Brighton. This meant that the journey's end would involve a two hour hike on dark country lanes from Haywards Heath to home in neighbouring Burgess Hill. So, all being well the tired gig-goer would be able to fall into bed at about 3 am. In order to get to this exam in good time on the 18th, I would need to leave the house at around 5.30 am! I cannot recall what assurances I was able to give my Mum and Dad that caused them to relent, but relent they did and soon I had a ticket in hand. 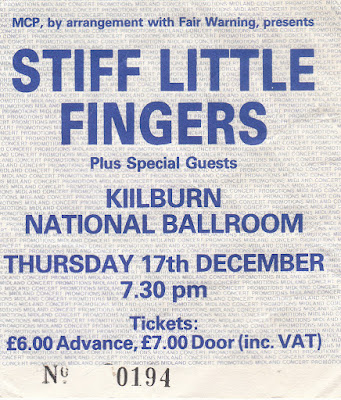 The last tour that SLF did in 1983 ended acrimoniously with a few punches thrown in for good measure according to Jake Burns. With the same line up (Jake, Henry, Ali and Dolphin) that split and the end of that 'Now Then' tour it would be interesting to see how the chemistry would play out just four years further down the line.

For my part in '83 Stiff Little Fingers were not a band on my radar. It was only after borrowing 'Go For It' and 'All The Best' in 1985 that they became a big thing in my world and went right up there along with The Stranglers and The Damned.

At the age of 18 I was not particularly familiar with London with only about a dozen gigs in the capital under my belt at that point. NW6 and Kilburn High Road were a complete unknown. A few years later I was living there and the National was just a two minute walk from my front door.

The anticipation for these new dates was immense. Inside the venue it was heaving and the balcony was creaking (if I remember from my years in Kilburn, the National was closed as a venue since the fabric of the building had become structurally unsound. I think that 17th December 1987 may have been a significant contributing factor in the Borough Council's decision!). Back in those days I would always make for the front. With the opening bars of 'Go For It' the crowd really started to surge forward and things began to get a little uncomfortable. With the first chord of 'Alternative Ulster' the inevitable happened and the place lurched, almost as if NW6 had been hit by an Earth tremor! Excitement momentarily gave was to fear as I genuinely believed that I was about to break a bone close by the barrier!

The gig felt like a spontaneous release of tension and energy for the several thousand within the listing walls of the National that night.

I think that the review that appeared in 'Sounds' the following week was a good appraisal of what I saw and experienced at that, my first SLF gig. 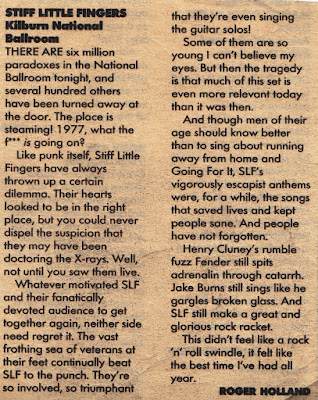 The gig was recorded on the album that was the 'No Sleep 'Til Belfast' (Link Records) LP. Removed from the adrenaline rush of the moment, the band don't sound that great.... in fact they sound like a band that haven't played together for four years even..... but did that mater? Did it hell!
As a footnote, even in the zombie state that I found myself in on 18th I managed to do enough to raise my Chemistry result up from an N to a C which was just sufficient to take me to Uxbridge and Brunel the following year.