Stiff Little Fingers exploded into the consciousness of young punks beyond he confines of Belfast in early 1979. That process would have been helped to no small degree by Paul Morley's review of 'Inflammable Material' that appeared in NME on 10th February 1979. See for yourself, but it is possiby one of the most glowing album reviews I have ever read! 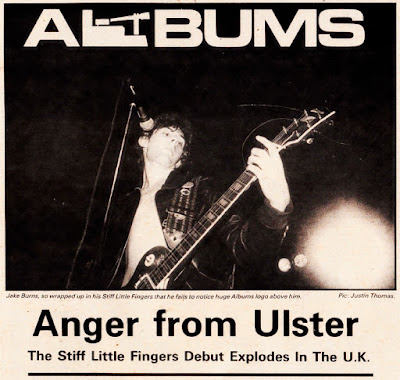 I was hardly expecting it but . . . even more so than "Never Mind The Bollocks" which turned out to becomedy - much more so than "The Clash" - which turned out to be quaint – as astonishing in its impact as "The Ramones", "Inflammable Material" is the classic punk rock record. A crushing contemporary commentary, brutally inspired by blatant bitter rebellion and frustration, that supplies neither questions nor real answers but consistently explodes Fuck off; Leave me alone! in the most scalding, dirty way since the set slogans "Anarchy In The U.K." and "White Riot" were laid to rest.

Straightaway, it hits hard, shakes the speakers, leers, leaps and dazes. "Suspect Device", a known classic song. that managed to transcend limp production when released on Rigid Digit Records last year, has been cleaned and organised by producers Geoff Travis and Mayo Thompson (see Penman's Rough Trade article, page 21) so that the two guitars of Jake Burns and Henry Cluney strike out in such fiery fashion you can't help wondering why such an 'outrageously nasty sound hasn't long been a rigorous necessity in rock'n'roll. The album’s guitar sound is not for the squeamish. Merciless and malicious, it has both depth and barbarity ; the guitars fight and feud , the battle is wild and selfish. You don’t just feel and hear the guitar, you almost see it. Makes The Clash sound tender.

Yeah, but if that isn't enough, coy-looking bespectacled Jake Burns' diabolically bloodthirsty vocals make Joe Strummer sound like a crooner and match Lydon move for move in terms of agile malevolence and extreme retaliatory intimidation. The lashing, vitriolic combination of voice and guitar is so profound it would only require a competent commitment from Ali McMordie on bass and Brian Falcon on drums and there'd be one classic rock'n'roll sound.

As it is, McMordie has a witty, scurrilous range of runs and Falcon's control is a lot more doggedly beneficial than has been suggested.

After "Suspect Device" just the whole side is glorious. Eight songs coagulated with spite, soaked with antagonisation, smarting with resentment, driven by real anger much more than faint petulance. Remember, these four guys lived slam in the middle of an environment that none of us can ever fully comprehend. I can only imagine that the forbidding atmosphere in Belfast must drip with tension, rancour, jaundiced confusion, fear and frustration, a kind of frustration none of us can understand; and much of this record, especially side one, comes unnervingly close to capturing and conveying a picture of the grey outrage of life over there, whilst the rampage and roar of the rock immaculately complements the aggression and vengeance of the songs.

Three of side one's outbursts, and four of side two's have words written by Daily Expressman Gordon Oglivie, a spot of peculiarity that debases "Inflammable Material" with a little of the feeling that can ruin the Pistols and Clash for some the suggestion of a presence of cynically motivated svengalis using the group for mischievous or disturbing ends.

Oglivie came to the group along with fellow newspaperman Colin McClellan, and it was at their suggestion that the group concentrated on expressing emotion and experiences from within their unique and atrocious predicament. Both are journalists working at an infamously foul form of reporting, and although the group readily disclaim accusations of puppeteering, prejudiced suspicions are unfortunately-easily aroused by the involvement.

Certainly it may be coincidence but Oglivie's lyrics, ("Suspect Device", "Barbed Wire Love" and "White Noise" on side one, "Law And Order" , "Rough Trade", " Alternative Ulster" and "Closed Groove" on side two) do seem a little glib, especially "Noise" and "Groove".

Yet ultimately, in the same way that even if "Anarchy In The U.K." was written by John Betjeman or Alan Bennett, Rotten's stinging, sly vocals made it totally uncontrived and his own - in the same way that Rotten was just too 'good' for McClaren's plans Stiff Little Fingers, by sheer virtue of their obviously genuine indignation and virulence, surpass any such manipulation here. If McClellan and Oglivie, and likely enough I'm doing them a disservice, are 'up to something', then the snarls and sourness in Finger's execution wreck it all. There is just no sign of lack of commitment or identification with the words, this again superbly typified on the awesome, “Suspect Device" where Burns delivers some twee couplets like it's the last thing he's ever going to do. 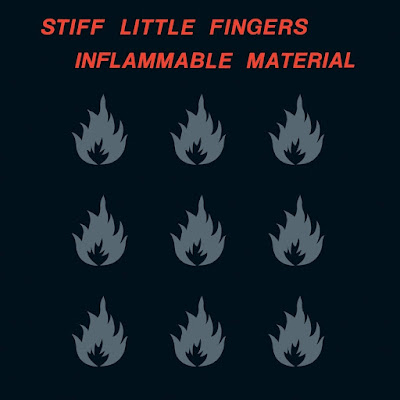 For me, it's the four apparently self-penned tracks which follow that vividly evoke and provoke more than anything on the record. "State Of Emergency", is hard and unbelievably embittered, fuelled by swirling, surging guitars:
"So please don 't just sit there
Let's try to break but
From all the hatred, suspicion and doubt
Try to change your life
That is no life at all. "
Hear it and flush . "Here We Are Nowhere" sneaks a snappy arrangement into 56 seconds, a three verse tantrum of emptiness. "Wasted Life" splatters disaffection and contempt all through its three minutes with a curt loveless chorus sung with timeless-despair:
"They wanna waste my life
They wanna waste my tine
They wanna waste my life
And they've stolen it away"
All through the album "they" remain elusive and anonymous, something that somehow intensifies the feeling of anguish and alarm. Fury is directed everywhere and nowhere. "No More Of That" is a short and definite retort to the distant "they", sung determinedly by Cluney.

"Barbed Wire Love" ironically sets a teenage romance within harsh imagery (kneecaps, booby traps and bombs), although there's a better song to be written about romance and this kind of war. Emphasising the irony, the song does overtly reveal a unique, penetrative pop sensibility that leaves every Fingers song with a discreet but memorable hook. Burns' vocals can do subtle, magical things with a melody, too, as on "Breakout". "White Noise" has a particularly finely balanced Oglivie lyric – a crudely pedantic attack on bigotry, but great musical dynamism.

Side Two lacks the obvious fluency of the first, but still has plenty of memorable moments. " Law And Order" is the most obviously Clash-derived track – and again, Burns gives the words life and reason. An interpretation of a reggae tune, Marley's "Johnny Was" invites vague comparisons with Clash's debut album and their "Police And Thieves" , but whereas Clash went into it as structure and rhythm, the Fingers approach it as sound and spirit "Johnny Was" rolls out an incredibly mature, totally justified eight-minute epic, that splutters and bursts into view, then settles into an easy, absorbing rhythm, guitars inevitably causing the damage, with Burns proving the versatility of his voice.

"Rough Trade" is a passionate comment on the Island affair (a recent mess where the label seduced and then foolishly dumped the group), Burns sneering the lyric with extraordinary distaste. "Alternative Ulster" is presumably a remnant from the Island period; it's produced by ex-Hot Rods manager/producer Ed Hollis. Again, it may be my imagination but it starts off sounding a little like the Rods or at least has a separate, uncomfortable pop slant – a shade smooth occasionally.

"Closed Groove" is a bizarre, tight-lipped, stiff-rhythmed piece - a sadly understated if adventurous way to finish the record. The ringing tone of an unanswered phone stuck at the end of the album, and you're left feeling numb after all the rage and remorseless intolerance. 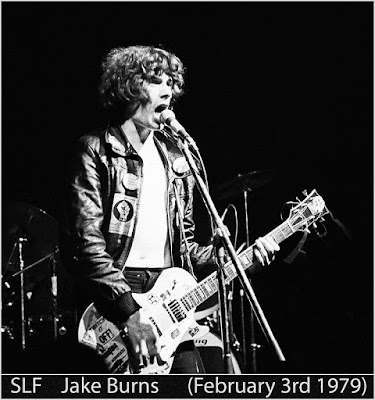 genuine, sullen concern, some thrilling moments of drama, the strong evocations of life in Ulster, the perceptive production, the severity and variety - even, in a way, the imperfections - this is a classic. Nothing since “Spiral Scratch" and "The Ramones" have struck me as possessing such immeasurable intuition.

Of course, now that they're isolated from the tragic ingredients of their inspiration (and maybe that means the music is a success in the only way it needed to be, that it dragged them out of 'the emergency' as their songs unashamedly admit is 'the way'), now that they're immersed in the rock'n'roll world, they'll probably never again communicate similar grievances and discontent with such raw exasperation.

But to have made this record and to have done it so positively, is much more than most can be expected to do, For such an achievement can cause problems. Their future is entirely up to them.

Without this in any way being a throwaway statement, it was perhaps always inevitable that Belfast would throw up the viral punk record. There are parts of "Inflammable Material" that are not just exciting or stimulating but quite humbling. It is a remarkable document.