Hugely enamored by his new discovery, having waxed lyrical in his review of the band's debut album, Paul Morley tracked the band down on tour in Cardiff for an interview with Jake. Here in what must have been one of their first major interviews in one of the big circulation music weeklies, Jake talks of the reasons for the band taking up the subject of #'The Troubles' in their songs when other Belfast bands chose to sing about anything rather than the day to day futility of the sectarian violence. 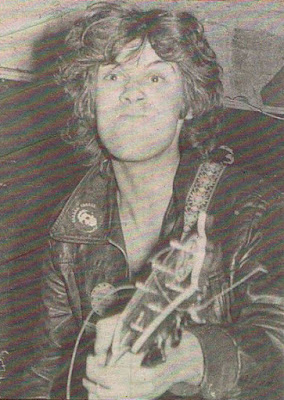 STIFF LITTLE FINGERS is a rock ‘n’ roll password to the ultimate teenage wasteland. It’s a message. And it’s also a way to escape. After hearing the definitive album statement on Ulster, PAUL MORLEY picks up on the facts of life behind the music.

Jake Burns sits next to me in a Cardiff pub. He’s the singer, lead guitarist and main songwriter for Stiff Little Fingers, who just completed a soundcheck for a gig at the Grannies Club – another sell out date on the current Rough Trade tour along with Essential Logic and Robert Rental and the Normal.

Burns is small, wears glasses. If he forgets to shave for a couple of days the gentle fluff around his cheeks only breaks into the harder stuff near his chin. His hair is a coy, curly mass of black. He’s wearing a thick ribbed sweater with a deep polo neck over and awful C&A large collar shirt, and a pair of shapeless jeans.

He laughs nervously, talks intelligently and perceptively and is 21 this week. Not long ago he was an accounts clerk. On a stage even at a soundcheck, when he goes 1/2/3/4! He’s somebody else, something else, somewhere else. Possessed. It’s dramatic.

“That’s the black leather jacket! It’s true…. It’s a thing I’ve talked about with my girlfriend and close friends and we’re convinced that there are three people within me.

“So up there it’s like Clash, Dr.Feelgood, The Tom Robinson Band, Culture, Bob Marley, Graham Parker and everyone else I’ve ever admired in rock ‘n’ roll, shoving them in a jacket, putting the guitar in the hands, sticking them on stage… he’s got to be like that, he’s got to be everything, and it’s bang!... the minute it goes bang!the hairs in the back of my neck stand on end… maybe with the 1-2-3-4’s it’s me counting myself out of one thing and into the other…” 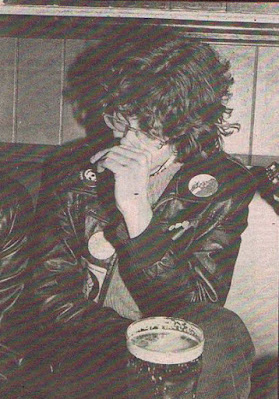 ... and play... "the serious normal person talking to you now"

Stiff Little Fingers are the best rock ‘n’ roll group in my world.

Jake Burns, Ali Mc Mordie, Henry Cluney and Jim Reilly come from Belfast, where teenage life is an alienating and alien thing that provokes much passion amongst those many new new pop groups (representing the cities’ youth?) who’ve emerged over the last 18 months.

Fun-loving funny bands like Protex actively attack Fingers for their flawed but committed concentration on the events and environments of an intense, absurd civil war of conscience.

Listening to Stiff Little Fingers’ powerful and moving debut album ‘Inflammable Material’ and talking to the band, you realise it’s an absolute insult to accuse them of anything so extraordinarily ludicrous as exploiting the situation over there. It’s not knocking Protex or The Undertones, who make great pop music as the Fingers will quickly point out, to say that Stiff Little Fingers have a right, or the right, to report and reflect direct experiences from a most resounding and atrocious contemporary predicament, and do so with great emotional courage and selectivity.

It seems an aspect of the distorting confusion and bitterness over there, and the way that inhabitants have become used to and tolerant of the tragedy, that the Fingers can provoke often quite hateful accusations and dismissals of their intentions and integrity. The group have long been aware that they tread a fine line, and it’s easy to appreciate how people can become suspicious of the group’s motivations.

“We just wanted to point out to people what was happening. Obviously you’re going to get people saying aw fuck off you’re making it up, but that shouldn’t make you stop.”

And significantly the widespread unsureness of the group’s position on a pure political basis is deep enough (such as Protex announcing that the group are caught up in the Troops Out Movement, a review in Melody Maker last week deciding that the group are for the troops staying in) to suggest that they’ve succeeded in impartially screaming out that this is what it’s like and they’ve had enough.

Belfast people claim that kids don’t want the troubles rammed down their throats, they’re sick of living it, but that hardly explains away the facts that apart from reporting the emergency there is plenty of hope and yearning in the songs, that the group play original, stunning rock ‘n’ roll dance music and that they’re incredibly popular in their home town.

Belfast has given Stiff Little Fingers the force to make them justifiably the angriest and most determined rock ‘n’ roll group anywhere. They had the desire, the emotion, the experience, the concern to justify their early music, and readily understand that that period is now at an end, or at least ending. It wasn’t exploitation. It was a need.

“It’s like Ian Hunter once said something about Northern Ireland, which is absolutely ridiculous. He basically said you’d have to take a whole generation of kids out of Northern Ireland and let everybody else die out  and then put that generation back in. He said it sounded barbaric but it was the only solution that he could see.

“It’s the only solution that I can see too! Truly… it’s because like the older people really do say hit him! But they don’t give a reason… what crime has he done against me?... he was born… he went to a different sort of church from me… and you’re supposed to hit him for that!!! It comes down to something as stupid as that… both sides are as bad as each other.

“And the point is the kids all group up like that, and form gangs and throw bottles at each other. Which I used to do – just ‘cos everyone else was doing it. I didn’t want to feel left out or mocked. Then I stopped. I thought it was fucking stupid. I didn’t want to do it anymore. I mean, it scared the hell out of me.

“It was fucking frightening. I thought why the hall should I go out there so someone can hit me over the head for something I don’t believe in. Fuck it, I became sick of it… but you can become part of it. There’s some people who keep going, and they’re the people I feel sorry for. Like my mate…

“There’s a game we used to play back home called ‘cribbie’. We used to play that all the time. One day we were just at the edge of the kerb, it was summer, just the two of us, and it was at a time when ‘the organisation’ around our area had just started, and they didn’t have guns but they still used to march around the area with like broomsticks over their shoulders, which I thought was fucking stupid.

But the minute they walked past my mates eyes lit up – and I won’t tell you the actual line he came out with till later – but he went out and joined the thing… and he was out on a ‘glorious mission ‘ for ‘the organisation’, and he was on a bus, that was the ‘glorious mission’ robbing a bus for funds… and his colleague got off, and he didn’t but as he was trying to get off the driver closed the automatic doors and caught my mates ankle and he was pulled out under the wheels of the bus, he had his insides crushed and died next morning.”