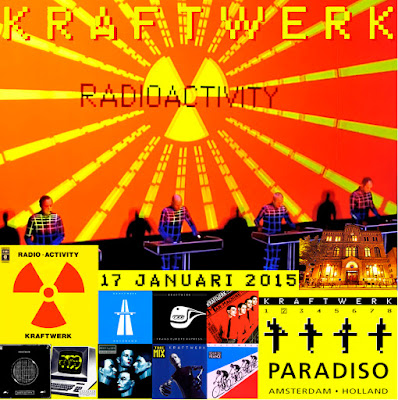 Next up was 'radioactivity' release in late 1975 an album which offered up a colder, starker aspect of Kraftwerk's sound. The title itself is something of a play on works as the album mixes the themes of the nuclear chemisty meaning of radioactivity with its Geiger counter intro, references to Madame Curie and uranium with references to radio transmission, Radiowaves, Antenna and News. I know crazy Germans. But crikey, is it out there for 1975!

14 years later a revamped version of the title track appeared in their 'The Mix' album which was less stark than the original but enhanced by references to nuclear facilities with dubious safety records in the past (Sellafield) to those with full on meltdown histories (Harrisburg and Chernobyl). Those clean living alpine cycling chaps took up against nuclear in a bit way playing several Anti-Nuclear events.

With this album, Kraftwerk were on the cusp of creating some really extraordinary, truly innovative music.