Stiff Little Fingers Declare A State Of Emergency In 1979 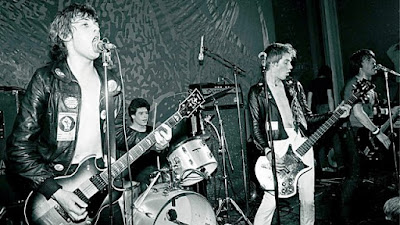 In an earlier post I have described my live baptism to Stiff Little Fingers but like so many of their contemporaries (The Undertones. The Ruts, The Members etc etc) their Year Zero could be said to be with good reason 1979.
At that time record companies were casting their nets far and wide, beyond punks capital in London and the Northern HQ of Manchester, in search of the next big thing. A&R men cast their eyes to the west and the as yet untapped talent that was present in Northern Ireland. At a local level with 'Good Vibrations' record shop and subsequent label, Terri Hooley had created openings for several Belfast bands as well as Derry's The Undertones. By 1979, the Patron Saint of Unsigned bands of Distinction, Radio 1 DJ John Peel, had each of the bands of the Good Vibrations' stable on rapid rotation on his late night show that informed the nation about what was up and coming. John Peel's patronage was a gateway to success or at least recognition for so many bands. Air time from Peel invariably meant that a band's career gathered pace with a momentum that often left the musicians involved floundering in their efforts to keep pace.
Such was the case for Stiff Little Fingers.
As all familiar with the band's history will know it was through a Jake Burns initiated affiliation with the journalist Gordon Ogilvie that the band initially came to the attention of a broader audience. Whilst The Clash sang of White Riots and the Pistols roared their clarion call for 'Anarchy In The UK', here were a band that on paper had far more to gripe about that their English counterparts..... the risk of internment, evening curfews, paramilitary pressures and don't forget the bombings. The writer in Ogilvie recognised that here was an opportunity for youth to express what life was like at what turned out to be the height of 'The Troubles'. As such he co-wrote the first two singles 'Suspect Device' and 'Alternative Ulster' both of which were full on reflections of daily life in certain parts of Northern Ireland.
Acknowledging the ever increasing interest in the band in England SLF (together with fellow Belfast band Rudi) travelled over for their London debut in September 1978, appearing at Camden's Electric Ballroom.

This new political expression emanating out of Belfast was not lost on Tom Robinson, singer and bass player of the political punk band the Tom Robinson Band (TRB). TRB were a big draw in the UK in 1977/1978 and so when Tom invited SLF as support on their 'Out Of The Darkness' national tour, the momentum was ratcheted up a further notch for the Belfast fourpiece. Propelled into a mix of big halls and university venues SLF had arrived and proceeded to stamp their name in the consciousness of UK punk fans.
Take a look at this Bushell penned review of TRB and SLF at the Hammersmith Odeon where the support band are commanding almost as many column inches as the headline act.
Sounds 10th October 1978
Causes without effect.
Tom Robinson Band/Stiff Little Fingers
Hammersmith Odeon
STIFF LITTLE Fingers are a punk band from Northern Ireland, a good punk band with promise and character. That said, their set was too long and paced wrong (which lessened their impact), but they still hit hard enough to more than justify their encore. No wonder, they write good songs with instant hooks and just the right amount of justifiable anger.
'Alternative Ulster', the new single, is the best example, though it's just one of a fistful of instantly accessible numbers (‘Suspect Device', '78 Revolutions', 'Breakout ', 'Wasted Life' .. . ).
Cashing in on their situation? I don't think so. People in that war-torn hell-hole have more reason than most to shout about things.
Mouthy Burns has got presence and a gravel-pit growl of a voice. The group are tight and confident (if a bit incongruous in that size hall) and they've got a sense of humour - see 'Barbed Wire Love' or the silly encore version of Merle Haggard's 'Proud To Be An Oke From Muskogee'!
Yeah, good group, could go far etc.
TRB play non-pretentious competent hard rock , simple and direct , built on Danny Kurstow's excellent trad-rock guitar workouts. They also stand for a lot of things that are unimpeachable (at what other rock concerts do you find Ford workers collecting strike money outside?).
The band's a rallying point for a lot of people involved in a lot of battles personal and collective, none of which are illusionary, as you might find out if you were black and outside the Blade Bone at the wrong time, Rab (now, now lads - Ed).
But tonight, at least, he wasn't challenging or provoking. He was re-inforcing,  a morale booster, and from the start he couldn’t have put a foot wrong.
In truth, a lot of the songs are ordinary (including most of the new ones) and the lyrics just wouldn't convince the unconvinced. Only a handful work really well : 'Martin' which is always moving, 'Glad To Be Gay', convincingly angry, 'Motorway' a classic rock single, 'Up Against The Wall' (which Tom didn't play bass on and it  didn’t matter which says a lot) and of course, 'Power In The Darkness'. First encore showcased the possible new single, 'You Turn Me On' a dull ballad, musically almost identical to 'I Shall Be Released'.
Second encore was an embarrassing 'Waiting For My Man' with a prolonged and unfunny dialogue section.
The sentiments are great, but I rarely got off on the music. It didn’t excite me. Got to wait for Harlesden this Saturday for that.
GARRY BUSHELL
Stiff Little Fingers were on the map, reaction to the band in the UK beyond Ulster was good and there was indeed a receptive audience for their message of barbed wire love conducted over the barricades here too. Such was the interest that the band took the decision to leave Belfast for London in order to maximise the opportunities that lay before them.
In the following week I will post some audio and written posts on Stiff Little Fingers in 1979, the year that the UK (except Newcastle perhaps!) took the band to heart.