The Adventures Of Hersham Boys - Sham 69 Lose Their Mojo! 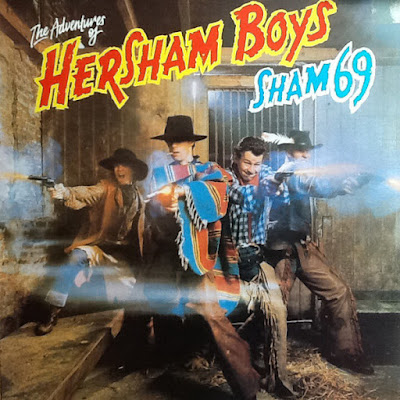 'The Adventures Of Hersham Boys' was Sham 69's third studio album released in September 1979 and whilst it went on to be the bands most successful album, peaking at Number 8 in the UK album chart it was pretty much panned by the music critics of the day. The album's Wikipedia entry includes a line from music journalist, David Hepworth' which summed up the critics view on Sham's 'new direction'!

"A tired, hollow effort struggling between weary attempts at rabble-rousing and blush-making pseudo-Springsteen 'street' songs that reek of desperation and contract fulfilling. As empty and self-satisfied a record as anything they supposedly set out to replace." 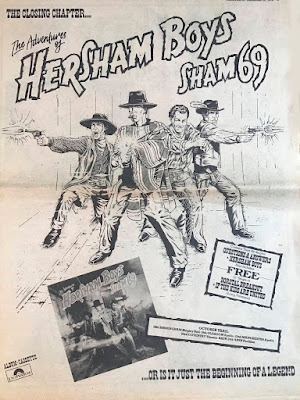 Record Mirror (22nd September 1979)
SHAM 69: 'The Adventures Of The Hersham Boys'
(Polydor Deluxe POLO 5025)
AN UNSATISFACTORY conclusion from Sham, but then it appears they've not really concluded so maybe it doesn't matter anyway and Pursey always was a confused mass of contradictions in the first place.
After being single handedly responsible for the unnecessary resurgence of the skinhead movement, Gentleman Jim decides he's really a cowboy.
But it's not a jail you need to break out of Jim, or even a borstal – just your own elaborately - woven paranoia, if a song like 'Voices' is anything to go by. Or the self-made martyrdom of ' Fly Dark
Angel', hideously howled with Dylanesque vocals.
'Cold Blue In The Night' rides a similar theme, insecurities thrust into the open for a heart-felt cry of
"Someone's gotta help me/ Sympathy defeats me/ can't help myself." The Yardbirds ‘You're A Better Man Than I' appropriately concludes the introspection of side one which also includes the corral - storming 'Money' and 'Joey's On The Street' (no ... relation, rat fans).
On side two self-identification extends to James Dean on 'Lost On Highway 46', but you're
ALIVE Jimmy, as well as being rich, famous, popular and accompanied by an excellent sidesman
in Dave Parsons.
Like 'Hersham Boys', 'Questions And Answers' is already owned by all the fans, and its inclusion is
hardly compensated for by the free 12 inch single. This features awful and over-long versions of 'If The Kids Are United', sung throwaway-style and sounding more like 'Roadrunner', and a live'Borstal Breakout’.
The latter, fortunately, adopts the words "It 's never too late to breakout" and there I'm right behind you, Jimmy. Christ, after a few years in a factory I did myself. The older - but - wiser lyrical change is matched by a similar modification on the album's live 'What Have I Got' where the reply is "I've Got You!" You still have, Jim, and they've still got you if you keep it cool. I know it must be very 'ard, but won't you try?
++ + MIKE NICHOLLS
Sounds (8th September 1979) 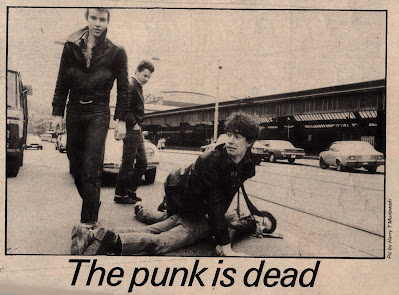 Email ThisBlogThis!Share to TwitterShare to FacebookShare to Pinterest
Labels: 1979, Sham 69