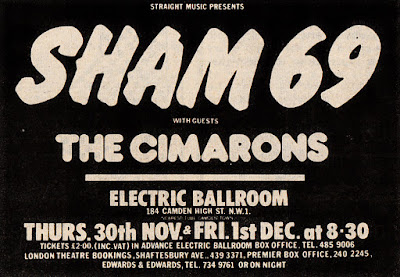 It promised to be a good night (or two even). A pre-Christmas home coming gig, celebrating the very recent release of perhaps the band's finest album 'That's Life'. However, it was not to be and at least the first night ended up in another violent shambles as a small faction of British Movement skins did their darnedest to derail the gig.

Garry Bushell took up the story in his review that appeared in the 9th December issue of Sounds. 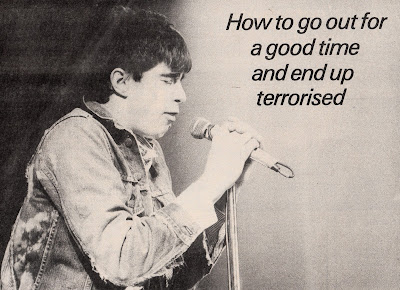 Sham 69
Electric Ballroom
So now we know who the real Sham fans are.
Three scenes from last night stick in my head this morning. One: A kid singing along to ‘Rip Off’. Four other kids come up “You like Sham then, mate?” “Yeah, they’re terrific.” “You f***ing c*** etc etc.” The kid hardly smiles again all night. The other four are British Movement, part of a gang of I suppose no more than 20. The same kids who mashed up the Lurkers fans at Thames Poly.
Before the set the atmosphere had been tense. Cimarons didn’t play because someone had smashed the drummer’s brother in the face on the way in. And everyone knew the BM had sworn to kill Sham next time they played London, but with friends and roadies lining the stage they had no chance. So instead they turned their attention to kids in the audience.
Threatening, intimidating ruining an otherwise shit hot gig with tension and fear.
The British Movement hates Pursey because so many kids take more notice of him than they do of them. So the ‘hardcore’ headcases will try and wreck every Sham gig. They’re a problem that won’t walk away and can’t be talked away. A problem Sham’ll have to deal with every time they play London. What’s the answer? To ban known BM kids from gigs? To organise squads of fans in the audience? I’m not sure. What’s certain is that the BM ruined what looked like being a great Sham gig.
The band kicked off with ‘What Have You Got’, the words amended to “communists and National Front/they’re all a shower of shit”. The sound was razor sharp, far far better than the quality at the Bridgehouse (if only the atmosphere had been the same) and the band smashed through numbers like an out of control steam train: ‘Cockney Kids Are Innocent’, ‘ Family Life’, ‘That’s Life’, one of the best songs on the new album.
‘Angels’ which I’ve just decided is the single of the year, saw the first real pogoing of the night with a mass of bopping crops slamming about out of time with Doidie’s solid drumming. Repeat the sight for ‘Borstal Breakout’ – this is what punk’s about. Scene two came during ‘Angels’ when a skin climbed on his mates back singing “Kids like me (points to himself) and you (points at Pursey)”. There’s more for you than against you Jim, never forget it.
Other good moments included the slower ‘Who Gives A Damn’, ‘Rip Off’ dedicated to Talcy Malcy with a new ending (“He’s just a c***/just a c***/just a c***") and ‘Hurry Up Harry’ which was scene three of the night with the wildest pogoing I’ve seen for months and these two girls sitting on the stage singing their hearts out beaming all over.
But all the time the BM skins had been operating and when after 14 numbers the band ended it took about 50 seconds before the ‘Sham’ chant went up. People were scared to clap. The worst moment came during the first encore of ‘Kids United’. By this time there was so much ill-feeling that Pursey just walked off stage, and though Dave and Kermit carried on until the end, no way would they come back again.
In the van outside Pursey was well and truly pissed off: “Ow can you play when the audience is like shop window mannequins. It’s our ‘ome town and this ‘appens…”
Was he wrong to walk off?
I’m not sure but I don’t blame him. The irony is, cutting short the set left out the newest song and next single ‘Questions and Answers’: “So think before you do what they say/ It’s your life so go your own way/ There’s no one can tell you/ What you can and cannot be/ The world was made for all of us/ For you and yes for me…”
And if you think it makes you tough to prostitute yourself to some tinpot crank who thinks he’s ‘feuhrer’ and who’s gonna shit all over you, fair enough. I think it makes you a tosser.
POSTSCRIPT: To put things in perspective, Friday night was far far better, the crowd was much bigger and rowdier and the BM kids who were there caused no trouble at all. Rather than run away from the problem Pursey gave a short speech during which you could hear a pin drop, reaffirming his hate for the Nazis and his love for his fans. 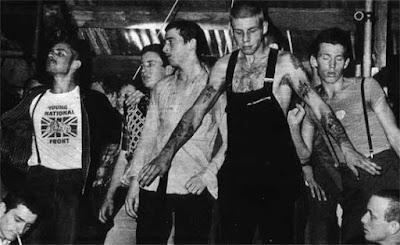 The trouble at the gig provoked an editorial piece into the background of the British Movement that appeared in the following week's issue of Sounds (16th December 1978).

In recent months London gigs, notably those of The Lurkers and especially last week’s Sham gigs at the Electric Ballroom, have been prey to the anti-social, anti-music activities of a very small gang of kids lead by members of the British Movement. Who are they?

Putting things in perspective the British Movement are tiny. Where they do exist it is in miniscule pockets in a lunatic limbo to the right of Britain’s ‘respectable’ racialists of the National Front. In other words they make no attempt to conceal their Nazism.

The BM was formed in 1968 by leading British Fascist Colin Jordan, fresh out of jail for offences under the Race Relations Act. He was a veteran of such ‘crusades’ as the paramilitary group, Spearhead (for which he, alongside present NF leader Tyndall were jailed), the British National Party, the National Socialist Movement and the Synagogue Arson Gang. Excluded from the newly formed NF for personal rather than political reasons (Tyndall, Pirie, Fountaine and many others shared similar overtly Nazi backgrounds) Jordan formed his own party which by 1975 had a grand national active membership of less than twenty. At this time Jordan decided to take a ‘leave of absence’ (shortly before being convicted of stealing three pairs of red knickers from the Leamington Spa branch of Tesco’s) and the mantle of leadership fell to Michael McLaugglin.

Messrs Tyndall and Webster had realised long before that in order to gain any degree of mass acceptance at all they’d need a populist veneer to their politics but this often makes them appear to the hardcore, or arguably more stupid Nazis, as softies, hence the ‘real’ Nazis join the BM, the League of St George, the Leeds based British National Party or the even tinier underground paramilitary Column 88, none of whom have such scruples about image.

The problem of fascist violence at gigs is new to Britain but it does stem from their inability to make any headway at all amongst the majority of kids. Their decision to turn on punk groups can only serve to isolate them even further from rock fans, a fact which when it eventually finds its way into their ‘brains’ (and we use the word reluctantly) might persuade them to turn to some more rewarding activity.

So did Sham bring this problem down on themselves? I fully understand Jimmy Pursey's genuine desire to engage and dissuade those that turned up at the band's gigs hell bent on trouble, but as Bushell pointed out in his Electric Ballroom review, that element of the audience were not open to his liberal approach to the situation, "They’re a problem that won’t walk away and can’t be talked away." If anything, I guess that the approach was naïve, but at the same time I don't really know how it could have been handled when the targeting of 'political foot soldiers' at punk gigs seemed to be a deliberated policy decision for the leadership of Britain's prominent far right organisations of the day. In contrast.... Sham 69 were a band of four musicians facing this shit every time they set foot on a stage.

Email ThisBlogThis!Share to TwitterShare to FacebookShare to Pinterest
Labels: 1978, Sham 69