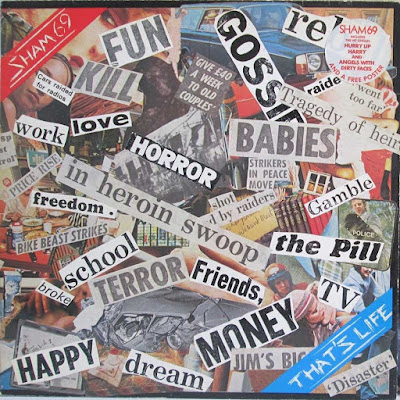 Sham's finest moment.... their 'A Day in the Life'. Nine to Five humdrum, the sack the 'orses, the boozer, night club and a punch up! Oh and listen out for a young Pauline Quirke!

It would be easy I s'pose, to be glib about the simultaneous release of these two albums: to quickly sum up Slade and Sham as passing strangers, heading inexorably in their op posite directions: one up, one down. But the truth, it se to me, is more complicated than that.

True, Slade, after staying at the top throughout the early Seventies (a more suc-cessful reign than practically any other group of this decade?) have been heading for the pits in the last few years, and a totally horrendous gig in Denmark last year had me more or less convinced they were to be resigned firmly to (happy) memory. But Monday night's gig at the Music Machine, saw the boys (mind you, considering the time they've been around, I have to use that term extremely loosely) somewhere near old form, and this album, while patchy, confirms my opinion that they could still have something going for them… enough to make this record a worthwhile, if not exactly essential purchase, and enough, possibly, to get the group back on an even keel.

Their big problem, however, the one I still can't see a solution to, is the same old one of material: the oldies are still way the best. It's 'Take Me Bak 'Ome'. 'Everyday', C'mon Feel The Noize' and the eternal 'Mama Weer All Crazee Now' that are the highlights of this album: forget the new stuff. Their ability to turn out those neat, complete, stompalong ditties seems lost forever. If they could  get that back though I'd put Slade back up there above 90 per cent of their successors. Ironically, if there is to be a renewal of interest to Slade's careers, one of the factors involved could be the ready acceptance by one of those suc-cessors, Sham 69, of the former's influence on them. The similarities, both musical (the same perfect three minute anthems, the same unstoppable rhythms. the same guts and enthusiasm) and ideological (the un-pretentious delinquent next door with a  heart of gold approach). 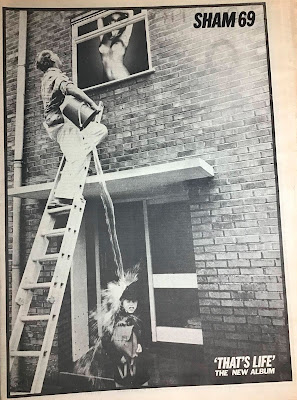 I should say that Sham are like early Slade: Slade's problems really started when they got involved with musicianship. Musicianship is of course irrelevant to groups of their ilk, dealing as they do in something much more basic. Sham thankfully haven't reached that stage yet, and in fact, don't ever look like reaching it: a group who only rehearse when they're forced in to it. A group who couldn't care less about technical mistakes.

Sham are on their way up, driven mainly by some great live gigs and a bunch of irresistible singalong singles. But with this, their 'concept' album, I personally feel that they've perhaps found a few obstacles in their way: that the route is just a little steeper than they first thought. I know Jimmy Pursey himself is pleased with the result, and I'm sure his fans will be equally delighted, but after a few listens, I can't help sensing a niggling disappointment, a feeling that it's not quite all it could've been. Maybe it's my own concept of concept albums (If you follow me) that's at fault - the concept albums that have gone before have perhaps conditioned me into expecting gloss and slickness. Of course you don't get that here: slick is the very last word you could use to describe Sham. Which, normally, I find endearing. This time it gets a bit much - the spoken scenarios linking the tracks for instance, while entertaining at first, soon begin to grate. Musical amateurism is one thing: theatrical amateurism something else. Perhaps, as a device it's simply overused: whatever, I don't think it works that well In the long run. 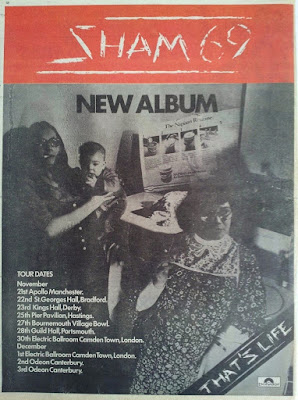 Nor am I convinced about the wisdom of doing slow songs ; the opening tracks ‘Leave Me Alone’ and 'Who Gives A Damn', still sound weak and flat to me. Side one picks up again though, with the title track and 'Win or Lose', and side two is something else again: I mean, how could it fall, including as it does, 'Hurry Up Harry’ (which even Robin Smith Is humming these days), 'Angels With Dirty Faces' and 'Sunday Morning Nightmare', still my favourite track. (Unless, of course, you've bought all already..).

I still think 'Nightmare' shows the group at their best: perfectly displaying their ability to capture and reflect everyday life (in this case the aftermath of the disco) The rest of the tracks contain the same embodiment of real life to a greater or lesser extent. The result is, I don't think, totally successful, but despite my quibbles, it's not  failure by any means. Not that it matters too much in the end, anyway; because one more thing that Sham have in common with Slade is that they are essentially a live band. No matter how good their records, are, they'll never match up. All they'll ever be are plastic souvenirs of a great live show, Sham + ++ ½  Slade +++. 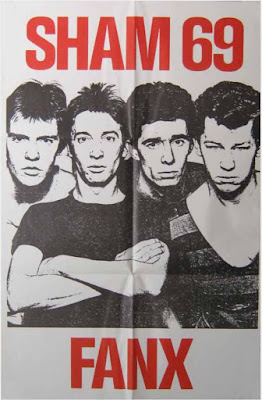 Email ThisBlogThis!Share to TwitterShare to FacebookShare to Pinterest
Labels: 1978, Sham 69