Recollections of The Stranglers From The Early '77 Period 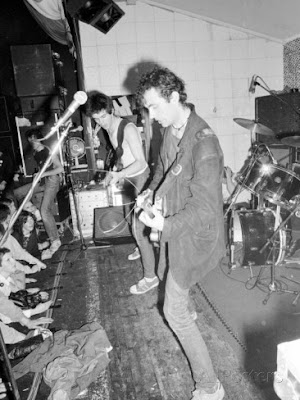 I have been meaning to post this for months! To get feedback on the site generally is something of a rarity (not a moan really as I know that the steps involved in responding to posts on this platform can be a real disincentive), to get feedback by letter is rarer still! Nevertheless, back in June of last year, I received just such a letter from long time fan, Duncan Round, in response to my posting  the Glasgow gig at Queen Margaret's University in February 1977.

Thanks Duncan, I love the opportunity to post band related experiences of fans so that others can get an insight of what it meant/means to be a fan of The Stranglers over 40+ years.

I’m very aware of your Aural Sculptors site and the brilliant job you have been doing for yonks. Keep it up – be proud.

For some reason I chose to have a look at AS today and discovered that you had recently posted this gig. Well I have never heard this before and I wondered whether I ever would. It’s a brilliant live document. The quality is perfect considering how it would have bee originally taped and for how long ago it was. Not sure whether Mr P has been anywhere near this to clean it up.

I first saw the MiBs about 3 weeks later in Manchester as a 17 year old. Grip had just been released and the band were starting to gain a sizable following. Didn’t have any money as I was still at school and where I lived was about 35 miles away from Manchester. It was a big thing for us to go and see a group, let alone in the big city, let alone an edgy band like The Stranglers. The times were that Parents didn’t let you do stuff like that, not like footie which was in the mainstream. Today’s youngsters just don’t understand how relatively easier it is to do things in a more liberal society. For me though it changed my life and outlook at the same time on what I could do. The barriers were coming down.

The Glasgow Uni gig takes me back in time to that early 77 period. I can remember seeing and listening to the band. There is the Middlesbrough Rock Garden gig from a few weeks later and of course the Roundhouse one from April as Rattus came out which are good in different ways especially the Roundhouse, as it documents the rise and rise, even a first outing for NMH. The Paris Theatre recording was really exciting as the band had a national platform to shine from, but it was all too short & managed, not a real gig. Can you imagine though how good it felt though to turn on the trannie and hear the band strutting their stuff – mint. But this listening of Queen Margaret’s Union nails it for me as to how it was, raw and in your face.

It is a rougher but clearer recording of how it was. Let’s remember seeing the band at the time was no hi fidelity experience. It’s not just the tracks that were played but it’s the in between banter of Hugh and how Dave fills in. The end of Grip into Sometimes demonstrates that and in fact a sound to be heard for many years. Is there the end of Wog before Grip?

Those times were special in my life and thanks for taking me back there. Not that later on wasn’t  good because it was an ever running story with many a twist and turn and of course all roads lead to today.

Email ThisBlogThis!Share to TwitterShare to FacebookShare to Pinterest
Labels: 1977, Duncan Round, The Stranglers