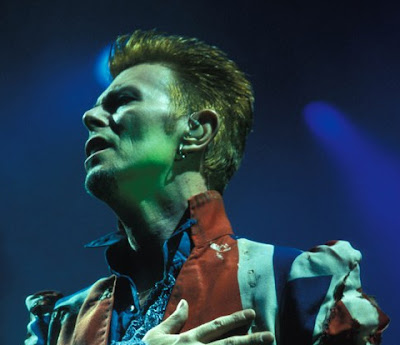 Well this month is unfolding to an absolute shocker for your average popular music fan. Lemmy, John Bradbury and then DAVID BOWIE. I posted something on social media this morning along the lines of Bowie being our generation's Elvis. I remember he day that Elvis died, my mum was in tears, I was eight and not particularly comprehending of the meaning of what happened. This morning it was our turn, David Bowie, the man without whom punk would not have happened or any alternative form of music for that matter, had gone days after his 69th birthday. Truely shocking. But perhaps it is not such a time to be so sad. David lived a life that even most rock stars would aspire to.... what a life it  was..... of highs and lows, but mostly highs, at least as far as the music was concerned.

Nobody in the history of popular music has produced a body of work that has always been at the coal face, carving out new directions. Others could just follow in his wake. I have loved his material from his mod days (when he himself was drawing his own influences from the likes of Tony Newley),

through the likes of 'Hunky Dory'. Just brilliant!

After the glitter and sequins of 'Ziggy' and 'Aladdin Sane' etc, Bowie reincarnated as 'The Thin White Duke' and gave us 'Station to Station'..... a world away from what came before.

Where to next David? Ah yes, why not the divided Berlin of the Cold War..... that'll produce something interesting. And didn't it just. My favourite Bowie period...... 'Heroes', 'Low' and 'Lodger'. Albums with atmosphere brimming over. Listen to 'Sense of Doubt', close your eyes and wait.... is that a Stasi agent on the street corner ahead? But there was humour too (of sorts). Those West German practical jokers Kraftwerk name checked David and his little mate Ig in their 'Trans-Europe Express'. Ever the gent Dave returned the compliment with 'V-2 Schneider' on his album 'Heroes' of the same year (1977).

The '80's dawned so Dave kinda created new romanticism with 'Ashes to Ashes'. Is there anything that this man couldn't do?

But what came shortly afterwards was a big slump in form as far as I am concerned. But that's OK 'cos David agrees with me. 'Let's Dance' was massive, as a single and as an album, but it marked that start of a creative drought that it seems almost every artist that I like experienced in the 1980's.

Luckily David had some more tricks up his sleeve, some worthy of Paul Daniels (Tin Machine), but others worthy of Dynamo ('Outside').

2013 and now retired from touring he gave us 'The Next Day' which proved he still was not prepared to stand still in this rock 'n' roll game.

What a career, second to none, not Elvis, Lennon or Sinatra!

Today, shops in London, Brighton and a host of other towns and cities belted out Bowie tunes in celebration of the life of the original kook. A great mark of respect I think.

David, if it were not Dry January (!!!) I would raise a glass to you to thank you for all the years that you have entertained me, from first listening to a taped copy of 'The Best of Bowie' in '81-'82 (a K-Tel release!) on a alarm clock/cassette radio lodged under my pillow right through to today.