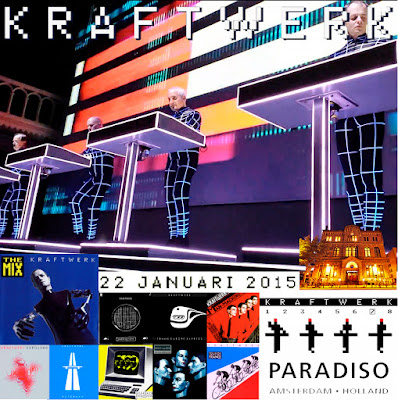 This is the first occasion that I had the chance to see Kraftwerk, on the original 'The Mix' tour in 1991 at the Brixton Academy and rather good it was too.
As mentioned in an earlier post, with 'The Mix' the band took the opportunity to spruce up some of their classic material with the idea I guess that here was a chance to really add something to the original versions. In Kraftwerk's case this would have been relatively straight forward as especially in the case the oldest material such as 'Autobahn' and 'Radioactivity' where studio capability and equipment had advanced tremendously in the 15 years or so since the originals were recorded. The songs do not replace or supersede the originals, rather they complement the originals and offer an alternative to which contrasts can be made. To my ears, the additions made to 'Radioactivity (one of my all time favourite KW songs) take the track to a new level. The stark, tinny, almost ethereal quality of the 1976 version is made to so huge and menacing, qualities that are lacking in the original version. I remember, at around the time that 'The Mix' was released, being parked up on a hill in Cumbria that directly overlooked the Sellafield plant. 'Radioactivity' was cranked up on the car stereo and it all made for something of an otherworld experience... just thought I'd throw that into 'The Mix'!
FLAC: https://we.tl/t-yZv6dcu92B
Artwork: https://we.tl/t-MKZsk7BUOu
01. [intro]
02. Numbers
03. Computer World
04. Home Computer
05. Computer Love
06. Airwaves
07. Intermission
08. News
09. Geiger Counter
10. Radioactivity
11. Autobahn
12. Pocket Calculator
13. Dentaku
14. Spacelab
15. The Model
16. The Man-Machine
17. Tour De France 1983
18. Prologue
19. Tour De France Étape 1
20. Chrono
21. Tour De France Étape 2
22. Trans-Europe Express
23. Abzug
24. Metal On Metal
25. [encore break]
26. The Robots
27. [encore break]
28. Expo 2000
29. Planet Of Visions
30. Boing Boom Tschak
31. Techno Pop
32. Musique Non Stop