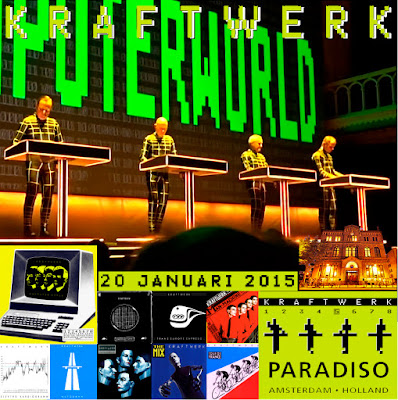 So here is what is in my opinion the third of a trio of Kraftwerk albums that defined electronic music, what it was and indeed what it could become. I am not into the Dance music scene. I am 52 in March and so come from an age group that just did not dance in public unless it was to something like Madness or generally jumping around at a gig but I recognise that the dance scene is huge and very influential now in its own right, but what a debt of gratitude that all of the scene's producers, DJs and acts owe to this geeky quartet from the Ruhr!
It's not that everything that they released after 'Computer World' in 1981 was substandard, their re-imagining of a selection of tracks from their back catalogue for 1991's 'The Mix' (given a gig in its own right in this Paradiso residency) offered something fresh even when dealing with songs that were of a 20 to 25 year vintage... but like a fine wine, if the quality is there from the offing then there is always the potential to improve with age. Likewise, 'Tour De France Soundtrack' of 2004 featured some excellent material. I think that the problem that Kraftwerk faced was that by the early 1980's an army of synth obsessives had caught up with their inspiration....Kraftwerk and with off the shelf equipment (as opposed to the home made electronics that Kraftwerk developed) shiny electronic music could be made in half the time for a fraction of the effort. Did Depeche Mode ever lose studio time due to a blown fuse?
When 'Computer World' came out I was 12 years old and home computing was becoming all the rage. My Dad was an engineer with the CAA (Civil Aviation Authority) in the UK and had an involvement with the development of air traffic control hardware and software. His interest in computing meant that I got a Sinclair ZX81 one Christmas which was great..... I wish I still had it. The BBC then into battle with Clive Sinclair with their Acorn developed BBC Micro computer in an effort to win the rapidly expanding UK home computing market. Here the BBC had an advantage and they started broadcast of a series by the name of 'The Computer Programme' in 1982, aimed at bringing the British public up to speed on the possibilities that these infant machines could offer. This series used 'Computer World' as its opening title which this 12 year old found hugely exiting.
Here, Kraftwerk were once again ahead of the curve..... titles such as 'Home Computer' and 'It's More Fun To Compute' gave the listener an insight on what home computing could be and did become.
'I programme my home computer and beam myself into the future'.
That of course is exactly what we do but instead of having to learn a variety of computer languages, the software that we use does it all in the background.
Whether home computing has revolutionised the way we live today is a hotly debated topic that even Kraftwerk may struggle to answer!
Whilst listening to the album again this evening I stumbled on a BBC radio documentary on the impact of the 'Computer World' album:
https://www.bbc.co.uk/sounds/play/b09nvs2t
FLAC: https://we.tl/t-DUbD4kQvQZ
Artwork: https://we.tl/t-T4r8EAdbkF
01. [intro]
02. Numbers
03. Computer World
04. Home Computer
05. Computer Love
06. Pocket Calculator
07. Dentaku
08. Autobahn
09. Airwaves
10. Intermission
11. News
12. Geiger Counter
13. Radioactivity
14. Spacelab
15. he Model
16. The Man-Machine
17. Tour De France 1983
18. Prologue
19. Tour De France Étape 1
20. Chrono
21. Tour De France Étape 2
22. Electric Cafe
23. Trans-Europe Express
24. Abzug
25. Metal On Metal
26. [encore break]
27. The Robots
28. [encore break]
29. Elektro Kardiogramm
30. Boing Boom Tschak
31. Techno Pop
32. Musique Non Stop