Straighten Out Half Moon Bishops Stortford 11th May 2019 - The Verdict

As a general rule I avoid tribute bands. I guess they have their place in the entertainment spectrum especially if the original act is no more. Over the years I have seen several tributes to The Jam and that’s okay…. much to my regret I never saw The Jam so the opportunity to hear their material live is limited. In the case of Straighten Out, they do their thing whilst the originators of that material are still out there playing those songs. I get that Straighten Out play an early set in the type of venues that The Stranglers outgrew by mid-1977 but I can’t say that I have made great efforts to see them (twice prior to tonight). The first time was at the Hope & Anchor, but that was more to see that iconic and very much Stranglers’ associated venue and the second time was at the Finchley Boys 40th Anniversary gig, again a Stranglers related one-off event.

So why you ask bother on this occasion. Well The Half Moon in Bishops Stortford is my old local (my son's christening party was held in the same room as well as Gunta's 30th birthday party). Even now, although I am on the other side of town it is still only a ten minute walk away from home.

On arrival, the band were somewhat bemused by the size of the stage. Whilst the venue does play host to rock bands, it is better suited for blues and folk gigs. The keyboards were an issue, so the stage set up needed to be different to what they were used to, but strangely enough, the compromise was to adopt a formation more akin to The Stranglers stage set up with drums and keyboards behind. Bass and guitar were relegated from the stage and were on the audience level in front of it.

The set that they play is deliberately focused on the earlier years up to and including 'La Folie' i.e. before the band challenged their fan base with acoustic guitars!

I would estimate that the crowd numbered about 60 which is a comfortable size for this particular venue.

Straighten Out played the set below with competence and thankfully an accurate ear to the original versions, something that The Stranglers themselves lost sight of during the Paul Roberts incarnation of the band. Great too to hear some songs rarely taken on by The Stranglers themselves i.e. 'Choosey Susie', 'The Man They Love To Hate' and 'Everybody Loves You When You're Dead'. Of particular note was the run out to 'Down In The Sewer' that is of a duration in keeping with the album version, or previous live versions. In this there is general agreement, that whilst it was great to hear 'Sewer' back in the set this year, the end is curtailed too soon. Just a bit longer there lads if you don't mind.

Great to see some local friends and Steve Williams who roadie for the night. 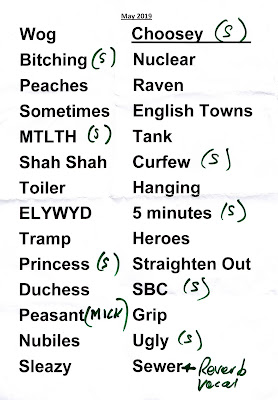 Email ThisBlogThis!Share to TwitterShare to FacebookShare to Pinterest
Labels: 2019, Straighten Out