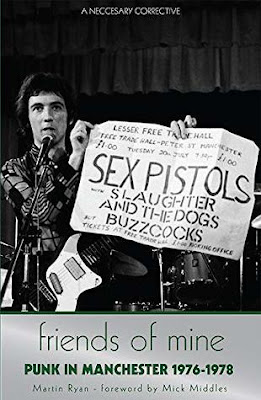 I have just finished reading the above book entitled 'Friends of Mine Punk in Manchester 1976-1978' and I would highly recommend it to anyone with a passing interest in the history of British punk. If there is one thing synonymous with punk it is the emergence of the fanzine. Written in the bedrooms of fans of this new music who were on the spot in the provinces (it wasn't just London y'know!) when those bands now looked upon as punk first ambled on to a stage fanzines were bang on the nail. Proactive, rather than reactive, fanzine writers networked with bands, labels and record outlets in such away that they could receive singles, albums and demos to review and gain access to the bands themselves in order to conduct interviews with which to fill their pages. Generally bands were more than happy to oblige the amateur hacks of the fanzine world, it being entirely in keeping with the 'No More Heroes' ethic of the early punk scene. In terms of early reportage, the 'zines left the slow to react music weeklies standing when it came to the birth of one of the most important youth movements in our history.

'Ripped & Torn', '48 Thrills' and of course Mark P's 'Sniffin' Glue' are some of the publications of this type. However, there were many more and originals of these badly zeroxed collections of foolscap paper will set you back serious money. Why so, not only are they pieces of social history that are over 40 years old, they were not intended to last..... Mark P's request that copies of his fanzine be burned .... move on, didn't help.

And it is a fanzine that is the cornerstone of this here book. Written by Martin Ryan and Mick Middles 'Ghast Up' along with 'Shy Talk' documented the birth of the scene in punk's second city, Manchester. With a starting point of the first Pistols gig at the Lesser Free Trade Hall, Martin Ryan has put together a fantastic narrative that puts the fanzine writing into the right context. The issues of 'Ghast Up' (all three of 'em) are reproduced in an Appendix. The book is centered around the fanzine writers and the handful of bands that carried the scene, principally, Buzzcocks, The Drones, Slaughter & The Dogs and The Fall. Cameraman, Kevin Cummins and journalist, Paul Morley also feature heavily. Funnily, when Paul Morley later wrote regularly for NME, I would read his reviews of a gig or an album and come away none the wiser as to whether he liked it or not. 'Ghast Up features some of his earliest music journalism under the nom de plume, Modest Young. It seems his particular writing style was established very early on!

Often in writings about the birth of punk they reader can come away with the impression that all of the Heavy Metal bands, soul bands and covers bands that served up their varied styles of music in the pubs and clubs up and down the land were simply wiped off the entertainment map when punk launched its first salvos of gob in late '76. It wasn't so, at least in Manchester. 'Friends of Mine' describes the venues that would put on punk/new wave gigs on a particular night of the week only to stop after a few weeks or months as the backlash against punk drove booking policy changes that impacted on band's opportunities to play. A peruse of the thorough appendix that provides gig listings in Manchester and the surrounding areas between April 1976 and December 1978 indicate how for many of the bands that punk 'destroyed' it was business as usual in this period. 'Lovin' Awareness' at the Electric Circus tonight anyone?

Inevitably, the book places much focus on the Electric Circus on Collyhurst Street, probably the most famous UK 'punk venue' after London's 'Roxy'. In it's eleven month lifetime (thereby beating the Roxy's 100 days by some margin) the venue played host to Sex Pistols, The Stranglers, The Damned, The Clash and The Ramones, not to mention the first gig by Warsaw who at the time were someway away from the moodily magnificent Joy Division that would ultimately become. Some of the best footage of the scene was shot in the club, with Buzzcocks, Penetration and The Jam performing in front its ghastly decor!

As a contemporary snapshot of the early days of punk in one city it would be very hard to beat 'Friends of Mine'.
Posted by Musky03 at 12:24

Email ThisBlogThis!Share to TwitterShare to FacebookShare to Pinterest
Labels: Buzzcocks, Friends of Mine, Slaughter & The Dogs, The Drones, The Fall