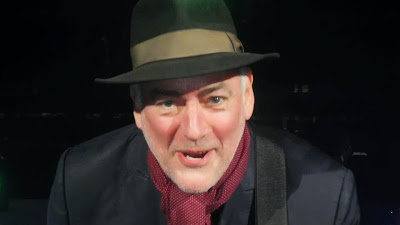 Ruts DC playing a gig on Friday 13th. Was this to be a portent of another cancellation? Was an inbound weather system heavy with frogs encroaching on Berkshire air space ready to drop its amphibian load over an unsuspecting Reading? Seemingly not as an initial pass of the venue on the way to get food indicated that all systems were go. Well perhaps it wasn't all systems go for everyone. As we entered the club, we passed a couple of downcast musicians struggling out of the venue with their amps into the early evening rain (which was plentiful at this stage). Apparently only two of the support act showed up ..... I imagine they may have split by Saturday lunchtime!

Tonight was scheduled to be an early set with Ruts DC due on stage at 8.45. All fine by me. This was my sixth time of seeing the revamped band, so their approach to the set is quite familiar. Clearly, a lot of thought goes into putting the set together. This is out of necessity as the bands material spans 30 plus years and runs the full gamut of the punk/reggae/dub spectrum from the early roar of 'Back Biter' to the reflective and sophisticated 'Technology'. With this wealth of material it if they get the wrong running order they run the risk of losing the audience early on. Happily, in my experience this fate has yet to befall them. The band ease the audience in with 'Whatever We Do' and 'Fools' before serving up the first of the nights Ruts songs..... 'It Was Cold'. Everyone gets exactly what they want.


'Something That I Said'
'Love In Vain'

It is clear now that Ruts DC are becoming tighter as they rack up more and more gigs. The band now exude a confidence that was not nearly so evident  18 months ago. Of course there is the rock solid rhythm section that underpins it all, but its as much Leigh's guitar work that adds a gloss to the whole affair.

And so Ruts DC deliver another great night's entertainment! Now it is onwards and upwards, with a busy couple of months ahead, with a mix of headlining gigs followed by a major national tour with their old muckers The Damned. What will be interesting is how they position the set for such a support slot. Obviously, this pairing demands that the classics of '79 are present and correct, but Ruts DC make no bones about it, they are moving on as a band that are moving with the times. No Ruts tribute band are they! As such, what they choose to play from the new album will be all important.

But before The Damned, for me there is the matter of Berlin to attend to.

As Leonard Cohen meant to say.....

'First we take Reading and then we take Berlin'.