Here we have a far less than favourable review from the pen of Tony Parsons I believe in which he records his impressions of the first night back in London near to the conclusion of the 'No More Heroes' tour. 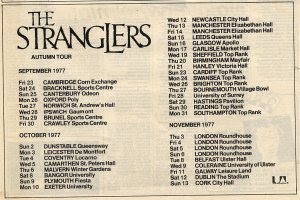 What ever issues Hugh was having on the night, doubtless fatigue would be a contributing factor as it was a pretty full on tour! The sound may have been below par but I find it hard to believe that their playing was as bad as the reviewer claims.... however, since I do not believe that the opening night at The Roundhouse was recorded, or if it was it has yet to come to life. 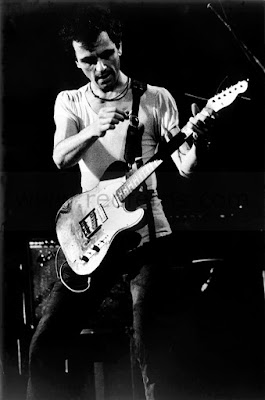 I have done my best to transcribe the review from a low resolution and partially damaged image. Thus there are a couple of words missing and one or two may have been guessed at wrongly. However, this fact does not impact on the meaning and the opinion of the reviewer remains clear irrespective of the omissions!


'So something did change (hardly for the better)

Wiping his face with a towel, Hugh Cornwell snaps angrily into the mike “We didn’t come here to be spat at. It’s very difficult to play when you’re being spat at.”

So that was why The Stranglers were playing so badly.

Enthusiastically they’d opened their first show of a five night residency at London’s Roundhouse with “No More Heroes” and then within 15 minutes put across two of their most popular numbers, “Bring On The Nubiles” and “Sometimes”. 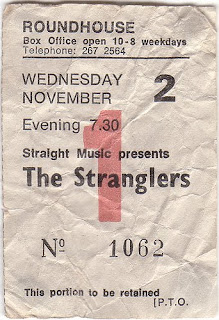 Theoretically at least it’s the type of material on which to build an excellent set, but the sound is appalling and their playing little more than amateur.

It leaves the majority of the audience deflated and unimpressed and the sight of Cornwell blaming them for this dreadful performance unsurprisingly results in some harsh verbal exchanges.

“So what d’ya come for if you don’t like it?” Cornwell ineffectually concludes, and without waiting for the expected reply the band lurch into another number, equally as awful as the preceding one.

Over the last year The Stranglers have emerged as the most successful recording band on the periphery of the New Wave (without which?) they might be little more than a regular chart act – a notion bourne out of the fact that they are seemingly one of the country’s worst live acts.

From playing the two albums and reading the reviews, I had anticipated seeing one of Britain’s most exiting acts. And where better for them to perform than the Roundhouse, the venue where they first attracted the praise of the London press as support to Patti Smith.

Their show should have been a triumph, a display of tremendous collective talent we had all been led to believe existed, instead it was a gloomy homecoming for four guys who played as if completely drained of inspiration.

Cornwell is struggling through most of the set, his gaunt face reflecting his mixed emotions, going from anger to frustration, belligerence to violence, until eventually he is a desperate man.

As he lashes at his guitar and feebly attempts to solo with erratic, brittle lines (?), he is a pitiful sight, and one that strangely the other three band members ignore. Bassist Jean Jacques Burnel nonchalantly shimmies off to Cornwell’s right, taking every other lead vocal, while Dave Greenfield keeps his eyes firmly down on his various keyboard instruments, and drummer Jet Black slugs out the leaden ______ nearly all night.

Among other pieces they play “Hanging Around”, “I Feel Like A Wog” and other selections from the first and second albums, and even include a new song, “Five Minutes”.

But every one is a monotonous testimonial to The Stranglers’ apathy, repetitive drones that insults the instrumental energy and ability they project in the studio.

It hits Cornwell the hardest, who at one point tells the capacity audience (hardly any of whom appear to be punks) “This is as quiet as being in The Red Cow on a Wednesday night….. something better change.”

Of course this is a cue to the song of the same name, and although it is one of their better performances does little to relieve the tedium.

How they have the nerve to return and play two encores, “Peaches” and “Grip” is beyond me and it is at this desperate point Cornwell completely disgraces himself.

Having derided his own fans, he now bleeds all over the stage, telling the crowd that the gig nearly didn’t happen because power cuts imposed by councils.

Needless to say this is fatuous and just another bullshit excuse for what is in reality and appalling show.' 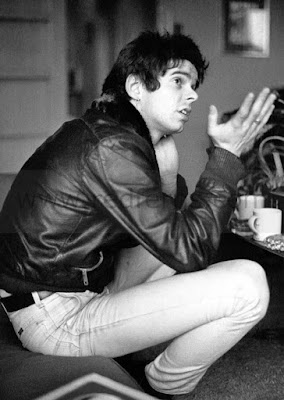