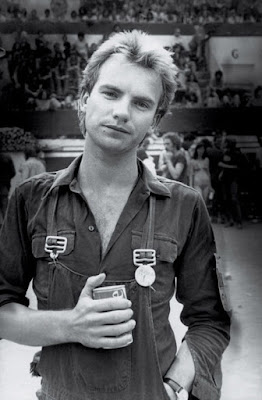 'Mr Sting, when you threw the bottle did you let out a little tommy queak'
(Sting at the Mont De Marsan Festival 5th August 1977)

To date I have only posted one recording by The Police, suggesting that they were not really a band for me. In fact they were almost my first gig (Brighton Centre December 1981 on the 'Ghost In The Machine' tour) .... I had the chance of a ticket but opted for Adam & The Ants instead. I do like The Police and do have all of their albums.

These days I think that opinions on Sting, the stadium rock icon, have distorted people's views on The Police. Their first three albums are great, 'Ghost in the Machine' isn't bad. It is perhaps only their final album 'Synchronicity' that was a bit up it's own arse, although I still stand by my opinion that 'Every Breath You Take' is a classic. I dare say most of the listening public never bother to listen too hard.... but really it is a sinister masterpiece of a song.

After all with their 'Reggatta de Blanc' were they doing so much differently to what the two tone bands or UB40 and Dexy's were doing? They got mocked for their cod reggae... not that it did them any harm mind!

Here, the band that were to become a worldwide phenomena were taking the first steps to that success with a set that only comprised a few originals supplemented by material from Stewart Copeland's previous band Curved Air and Sting's Geordie jazz ensemble, Last Exit.... nice! 'It's My Life' by Sting's local heroes, The Animals, also feature.

Email ThisBlogThis!Share to TwitterShare to FacebookShare to Pinterest
Labels: 1977, The Police