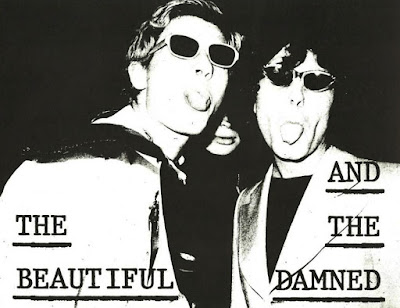 Punk rock, early doors and against the odds The Damned are winning hands down. Outsiders in terms of King's Road chic or Westway street credibility, the clowns of '77 punk rock must have been doing something right. First to release a punk single...... first to tour the US and relevant to this series of related posts, the first to secure a major tour that took them for a time out of the punk clubs and music pubs and into the City Halls, Odeons and Apollos of the land.

In 1977 glam was glum, the protagonists of bacofoil rock had either moved on in musical terms (David Bowie, Roxy Music) or had unwittingly navigated themselves into the doldrums of popular music (Slade, The Sweet and indeed T Rex themselves). By March 1977 there was definitely something malodorous fermenting in the capital and elsewhere in the bigger cities of the UK..... and the music press were wise to the change that was in progress. Punk rock was occurring and the bands at the forefront of the scene had declared open warfare on the technically super proficient but staid musicians of the day... the perceived dinosaurs of the rock scene, the extinction of whom was punks raison d'être. To give them their dues, some of those very same dinosaurs did venture behind enemy lines, Led Zeppelin's Robert Plant and The Who's Keith Moon were seen at the Roxy and the Vortex checking out the fuss was all about and where the completion lay. But it was Marc Bolan who seemed to take the most interest in the new vanguard and actively embraced this new music.

It was perhaps a happy set of circumstances that of all of the new 'punk' bands making a name for themselves that he chose The Damned as tour support. Sensible was a fan and had appeared in the music press sporting a T Rex T-shirt, but perhaps more to the point the offices of Marc Bolan's publishers were located above the Stiff Records offices in Notting Hill. What ever the exact clincher was, the dynamic of the tour union seemed to work if you consider the interviews and reviews that will follow in this thread.
Posted by Musky03 at 23:24

Email ThisBlogThis!Share to TwitterShare to FacebookShare to Pinterest
Labels: 1977, T Rex, The Damned