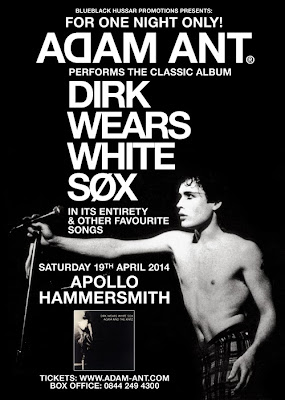 I managed to get hold of tickets for this a couple of days ago. It was strange that I was only listening to 'Dirk Wears White Sox' on the very same day that this one off gig was announced. I would consider myself to be quite an Ants fan, although I have only seen them/him twice in span of 32 years.

Hardly prolific on the gig front I'll willingly admit!!!. Although I did get a ticket for a fan-club only gig in London in '82 (his first since breaking up the Ants.... but I couldn't go.

My problem started early. I bought 'Kings Of The Wild Frontier' in 1980 and yes, 'Prince Charming' in 1981 (but in my defence I was only 12!). I realised back then that the 'Prince Charming' album wasn't up to much and of that time it was the B-sides of those post-'Kings' singles that were always as, if not more, appealing that the chart friendly A-sides. Little did I realise at 12 that Adam was revamping unreleased Ants songs that had been originally penned and demoed in 1978 ('Christian D'ior', 'Friends' and 'Beat My Guest'). This recycling continued after he had disbanded the band and headed 'solo' with Marco ('Red Scab' and 'Juanito The Bandito').

At the same time that I was buying 'Stand And Deliver', I was delving into the back catalogue (most of it courtesy of Les's market stall in Burgess Hill, when singles set you back the princely sum of 30p!). This is how I acquired the pre-'Kings' singles 'Cartrouble' and 'Zerox'). As per usual with the demise of a cash cow to the industry, such as Adam & The Ants, record companies past and present were keen to issue product as quickly as possible to milk the last pocket money out of a fickle teenage fanbase destined to move on to the next big thing withing weeks. I my case, this was reversed, as I started to look backwards.

A 12" single was release featuring Do It-era tracks and the very early tracks of 'Deutscher Girls' and 'Plastic Surgery' lifted from the soundtrack of Derek Jarman's utterly baffling film 'Jubilee' saw the light of day several years after they were first recorded.

This is not to forget the stunning 'Dirk Wears White Sox' album which to me didn't represent punk, I didn't really know what punk was at the time. It was/is a unique and quirky British album.

And there I left the Ants... and Adam for that matter for another 7 or 8 years. It was only when I went to University in Uxbridge that I was introduced to a goldmine of material very much in the same vein as the 'Dirk' material, only predating it and mostly unreleased (it was here that I found the originals of all of those old B-Sides!). The Madam Stan Demos, The Decca Demos along with a handful of 1978 live club dates.... manna from Heaven.

I surprise myself with the fact that I have yet to see Adam doing his stuff again in the last couple of years. Of this revival, he has been quite open about the fact that he wants to get back to that punk vibe, which means that 'Lou' (very topical right now) and the likes of 'Rubber Paople' now sit side by side in the set with 'Ant Music' and the afore mentioned 'Prince Charming'.

I trust that given the main set the 'other favourite songs' are in keeping..... 'Hamstead'!!

Email ThisBlogThis!Share to TwitterShare to FacebookShare to Pinterest
Labels: 2014, Adam and the Ants, Adam Ant