JJ and Dave Interview On Rodney On The Roq, Los Angeles 8th November 1980 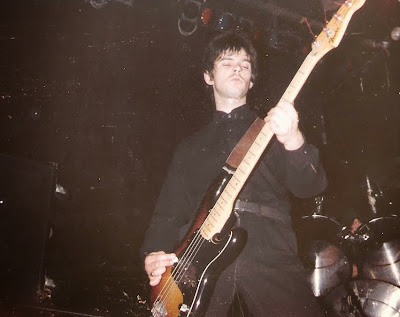 To coincide with the recent repost of the Whisky show, here's a rare radio interview that JJ and Dave did that was broadcast on the famous new wave programme, Rodney On The Roq. The programme is confirmed to have been aired on 8th November as reference is made to the band's appearances at The Whisky 'tonight and tomorrow night' and as this programme went out at the weekends, this pins the broadcast to the Saturday night (8th).

This was a Stranglers Special night, linked to the Whiskey residency, in which Stranglers material, along with tracks from Hugh's 'Nosferatu' and JJ's 'Euroman' were interspersed with interview clips with JJ and Dave. Hugh is not present as according to JJ 'he had a monologue with a whisky bottle' the previous night and Jet's whereabouts is also unaccounted for.

The topics under discussion are broad encompassing US politics ('George Bush to be in power by 1984'), Europe as well as Stranglers specifics in what was the most turbulent phase of their career (Hugh's visit to Pentonville, the pending Nice trial and the band's time in Queensland as hosted by Premier Joh Bjelke-Petersen).

It makes for 40 minutes of good listening.

Needless to say, JJ does most of the talking......