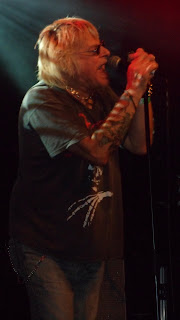 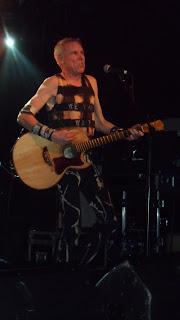 Last night say something of a punk treat in the form of The UK Subs and TV Smith on the same bill for an evening of early Christmas frivolity at the Garage in Islington.

I got there early in time to see the first support (which is unusual for me). They were a young band from Blackpool called Outl4w if I remember correctly. They were quite good, their sound much enhanced by the inclusion of a trumpet.

TV was playing on his own, acoustically, and played a good set of his solo stuff, intrspersed with Adverts songs. Songs like 'It's Expensive Being Poor' and 'The Immortal Rich' never sounded so on the button as they do right now as we face hard times for several years to come as the Chancellor of The Exchequer admits failure in government economic policy.

Oh well, at least it's Christmas.... which lead TV nicely into his annual opportunity to play his Christmas song. This I filmed, but a caveat is needed here. I think that I had the video setting on an inappropriately high setting and as a result there is an audio/visual synch issue with these clips. But they are what they are.

First up is the aforementioned 'Christmas Bloody Christmas, followed by 'New Church' and 'The Lord's Prayer', a song that he penned for The Lords of The New Church. Something of a religious trilogy then.


'Christmas Bloody Christmas', 'New Church' & 'The Lord's Prayer'
'Punk Rock Poem' & 'Gary Gilmore's Eyes'
A quick word about the Subs. You know exactly what you're gonna get from Charlie and Co, consistency is the order of the day. Playing with a tightness that can only come from endless touring, I have enjoyed them over many years. On this occasion though I was not there for the full set, but what I saw was good, including the classic 'Down On The Farm'.
'Down On The Farm'
UK Subs
﻿
﻿
Posted by Musky03 at 09:43