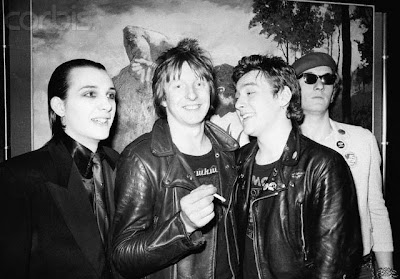 The Damned in 1979
Here's a gig that saw The Damned, regrouped and once again in the US. This is one of the most chaotic gigs I have ever heard. Captain is just dangerous in front of this audience (two nights before at the Old Waldorf in San Francisco fists flew after Sensible urinated on a member of the audience!)
'Love Song'
The Damned at The Old Waldorf San Francisco
6th July 1979

This is the time when I would most like to have seen The Damned. That's not to say that  wouldn't have been apprehensive about it! A mate of mine's first Damned gig was at The Corn Exchange in Cambridge in '79 and by all accounts (well his anyway) it was basically a big fight with occasional musical interludes!

Nevertheless, there is little doubt that with this year's 'Machine Gun Ettiquette' The Damned peaked, producing one of the finest albums in UK punk.

I am seeing The Damned tonight at The Roundhouse in the good company of The Dickies. I have no doubt that the gig will be great, but somehow not as raucous as this Los Angeles gig in '79.

Email ThisBlogThis!Share to TwitterShare to FacebookShare to Pinterest
Labels: 1979, The Damned