The Palace and The Punks by Tony Hill 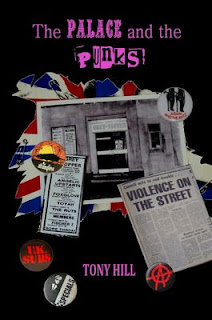 This book has been mentioned in the past on the Burning Up Time Forum. Since my job involves quite a bit of travelling, I invested in a kindle and thus it was that this book set me back a pound or so.

Telling the story of The Grey Topper pub in Jacksdale, Nottinghamshire in it's various incarnations over the past 50 years or so, this project was clearly a labour of love for the author, even more so when you consider that like me he was just that little bit too young to attend the gigs described in its pages! To look back and to know that those bands, notably The Ruts, Members and Subs played just down the road in your village woud really rankle.

The Stranglers are featured, hence the Forum connection, with a contribution from Jet, as they played at the venue in their early days, before the success of Rattus took them away from pub gigs. Jet talks of those early 'ice cream' years and of the band's appearance at this properly off the beaten track venue.

This book is a great little piece of highly personal, social history of which we should see more. Underlying the music is the spectre of the early years of the Thatcher administration that was ultimately to call time of the mining communities of Nottinghamshire and everywhere else for that matter. The stories of many 'punk critical' venues are well documented both in print and on-line, but for every Roxy and Marquee, there were a hundred unsung pubs, clubs, cinemas and dives that each played their own part in the punk wars and perhaps none are more important than those out of the way venues that created and maintained a scene many miles away from the large towns and cities that regularly featured in tour schedules.

I would recommend it very highly to anyone with a passing interest in the history of the late '70's UK punk scene.

Email ThisBlogThis!Share to TwitterShare to FacebookShare to Pinterest
Labels: 2012, The Ruts, The Stranglers