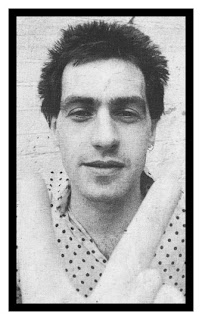 Today marks the 32nd anniversary of the death of Malcolm Owen, lead singer of The Ruts.

Back in 1980, Malcolm's demise at the mere age of 26 passed me by without knowledge or understanding. I was 11 years old and didn't even know who The Ruts were. It was a few years later that the band entered my life. From what I recall, a mate taped 'The Crack' for me in about '84. It must have been 1984 because I remember alternating much of my 'O' level mocks revision between 'Machine Gun Ettiquette' and 'The Crack' which were on opposite sides of the same C90.

It was only when I went to Brunel in Uxbridge in 1988 that I met some mates in the area that The Ruts became much more important on my musical horizon. In this period I lived both in Hayes and Southall, two areas steeped in Ruts history. Of this my mates were justifiably proud!

The Ruts never had the breaks that they deserved. The plaudits for almalgamating punk and reggae always went (and continue) to go to The Clash, but The Ruts did it better without half as much fuss.

Here's an audio recording of the band in Paris a few months before Malcolm died.

A little later the tragic death of Malcolm was the subject of a short documentary which makes interesting and poignant viewing.

To finish, I can thing of no better tribute to the incandescent talent that was Malcolm Owen than The Damned's 'Limit Club' written for Malcolm in 1981.

Email ThisBlogThis!Share to TwitterShare to FacebookShare to Pinterest
Labels: 1980, 2012, The Damned, The Ruts