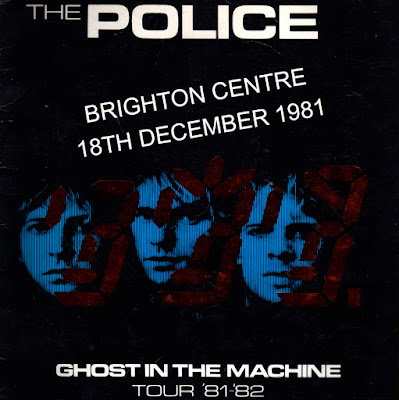 Now this may divide opinion. Three white guys who had all been around the musical block it is fair to say jump on a bandwagon called punk and make a name for themselves. Soon to ditch the shackles of punk they carved a niche in  the British music industry with their 'Reggatta de Blanc'. The formula worked and whilst the music press were always suspicious of The Police, the public certainly took them to heart as they churned out hit after hit over their five album career. This set alone includes nine top 20 singles, four of which went to number 1!

Where did I stand on them? On record I think they are great, especially the first three albums but live from the earliest days Sting could not suppress his jazz roots and this lead to diabolical improvised versions of some of their songs on stage. Listen Sting, 'Roxanne' is a great track but no one needs a live version of it strung out for eight minutes!

This particular gig was very nearly my first. I was offered a ticket but opted to see Adam and the Ants instead, arguably the wrong choice.

In 2007-2008, The Police embarked on a 158 date world tour (yes really that many!) and given how public the rifts were in the band, one can kind of question their motives for undertaking such a schedule.

But anyway, here they are promoting the 'Ghost In The Machine' album in December 1981.

Email ThisBlogThis!Share to TwitterShare to FacebookShare to Pinterest
Labels: 1981, The Police