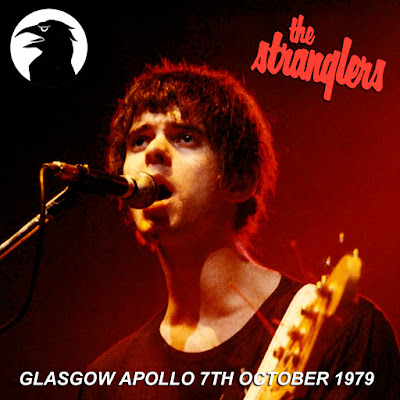 A happy Raven birthday to this one. 41 years ago tonight, touched up and speed corrected by Dom P.

I have also unearthed some contemporary reviews and comments on the gig, both from Jet's press collection and my own. In the main, the reviews appear to be very positive, with both the 'Record Mirror' and 'Superpop' reviews acknowledging the band's courageousness in terms of relying on the strength of the new (and therefore relatively unfamiliar) material rather than the safe, guaranteed crowd pleasers of the previous two years. Particular attention was paid to JJs emerging vocal style 'the  husky, breathless vocals which sound more like a dewy-eyed early Sixties teen idol, than a big, bad stud-in-town' contrasting strikingly to the guttural roar on tracks such as 'Curfew'.

Think about it, 12 months prior to 'The Raven' the band had reached their rawest punk pinnacle with the material on 'Black & White'. But by 1979 the band were far more introspective.... might have been something to do with the heavy duty pharmaceutical intake perhaps.... The themes were still dark, but almost seductive and alluring. They ranged from lost Samurai warrior codes, exotic continental knocking shops, revolution in the Middle East and some ne'er-do-well geezer by the name of  Harry.

Whilst 'Black & White' took the band away from their basic rock 'n' roll roots, 'The Raven' took the band into uncharted waters that left fans bemused and enthralled in equal measure. This is the reason that for many 'The Raven' and the tour that accompanied it are the definitive highs of the band's long career.

Listen out for the berating of the Apollo security that causes 'Sewer' to be cut in mid flow. Bouncers doncha' just love 'em. 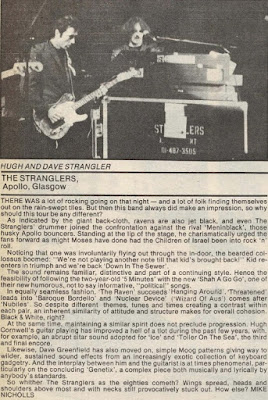 Record Mirror (13th October 1979)
Superpop 27th October 1979
Glasgow Strangled Again.
The Stranglers
Glasgow Apollo: 7.10.79
The men in black returned to Glasgow for a third time with a killer album, new improved stage show and a - vengeance. It’s perhaps indicative of just how strong their current stage set is that the highlights of the show are no longer the obligatory ‘Hanging Around’ and ‘Bring on the Nubiles’.
They don’t even play safe shots like ‘Go Buddy Go’, ‘No More Heroes’ or even ‘Grip’ anymore, instead wisely concentrating on their latest work ‘The Raven’.
Opening fairly low key with ‘Five Minutes’, almost immediately it’s into the new songs. ‘Shah Shah A Go Go’ goes from an earsplitting Dave Greenfield keyboard refrain straight into the softer Burnel vocal of ‘Ice’ – again his piercing, digital keyboard stabs riding superbly on top of the backing muscle.
If anything, JJB’s smoothed off his often frantic shoutings to deliver husky, breathless vocals which sound more like a dewy-eyed early Sixties teen idol, than a big, bad stud-in-town. Truth is, it only highlights what a capable singing voice he really has – now balancing Cornwell’s gruffer, angrier tones more readily.
Indeed the material from ‘The Raven’ contrasts superbly with the black moods of their ‘Black & White’ set, and when ‘Down in the Sewer’ arrives mid-way through it provides timely light from the shade.
The pace builds forcibly as they heave layer upon layer of heavyweight playing towards the show’s climax – drummer Jet Black never lifting his head from his kit all evening – slamming into ‘Threatened’, ‘Baroque Bordello’, ‘Curfew’ and ‘Tank’ in quick succession.
They then finish with their – or more to be precise Cornwell’s new found tour de force, ‘Nuclear Device’ where he demolishes his companion’s great backing harmonies with his meanest snarls of the night.
A lot of people may feel that they’ve been a bit short changed because no-one had a real go at the house security, and there was no real drama to report back to the lads down the pub. But the fact is, The Stranglers are back. They’ve never played better or looked meaner.
BILLY SLOAN. 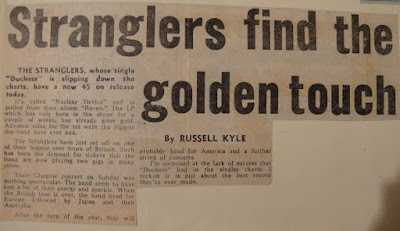