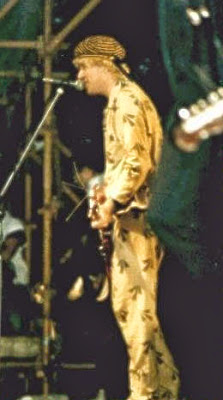 Captain Sensible
GLC Benefit, Brockwell Park, London
4th August 1984
This is a session that The Damned did for BBC Radio 1's Saturday Live programme, hosted by DJ Richard Skinner. Immediately after recording this handful of songs, the band crossed London to headline a benefit gig in Brockwell Park in support of the then ailing Greater London Council (GLC) which as a consequence of the left-wing nature of the organisation (embodied by 'Red Ken' Livingstone) placed them squarely in the sights of Margret Thatcher's government of the day.
This gig was notable a being the last gig Captain Sensible played with the band for some time. Hence, the bootleg album that emerged from this gig went by the name of 'Captain's Last Stand'. If anyone has a good losss recording of this LP, please get in touch as I only have a poorish quality cassette version. Thanks.
FLAC: http://we.tl/vmucmX3gTh
MP3: http://we.tl/MQsZRZGGDA
01. Intro
02. Stranger On The Town
03. Limit Club
04. Smash It Up
05. Outro
﻿
Posted by Musky03 at 16:57

Email ThisBlogThis!Share to TwitterShare to FacebookShare to Pinterest
Labels: 1984, The Damned