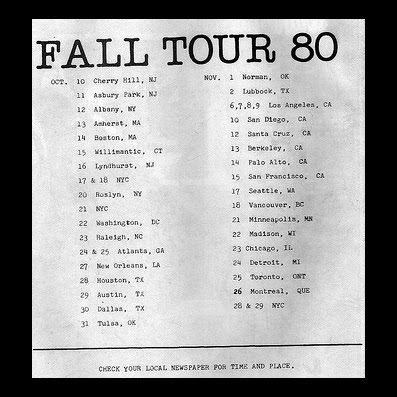 Here is something special, presented here in the original lossless format and supplemented with some artwork. I will leave the description to Dom P who has remastered this gem from Dime, also are included the original downloader notes.

Many thanks to Minnesota Mike and Dom P.

Dom P:
This fantastic bootleg just popped up on Dimeadozen, and it's a stonker...

This is the best boot to emerge on that site since the Paris 1980, or the Bordeaux 79... this is brill.. Some of the original notes below from the Dime trader called Regtrademark, many thanks to him. I have preserved the loss-less format so I hope you all have fast broadband! ... enjoy.

"Minnesota Mike made audience recordings of shows in the Minneapolis/St. Paul area between 1978 to 1985. He used a stereo Sony TC-D5 cassette tape recorder and two Shure SM57 mics, top-of-the-line equipment in their day. He recorded shows just for himself and never made copies. I met him years later and he allowed me to trade copies his tapes. At first I traded cassettes and then when the technology became available, on CDR. So some of the copies that are out there are second generation or more, and some are digital copies of the master. I wasn't a very active trader and, in fact, some of Mike's tapes have never circulated. On the other hand, some of them have circulated widely and caused a sensation among collectors, such as U2: Uncle Sam's 4/9/81, and Husker Du: Longhorn 5/7/80. Mike's work is also the origin of some tapes uploaded by others here at Dime: "Iggy Pop - Minneapolis 20 Nov 79", "Richard Hell & the Voidoids - Longhorn Minneapolis - 31 July 1979". His tapes are often mistaken for Soundboard or FM sources -- but they are not, they are audience recordings."