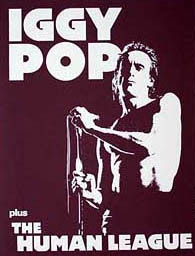 Here's a short set from The Human League when they were an entirely different band to the electro-pop version (albeit a very good one) that had the hits.

Emerging from their home town of Sheffield in the immediate aftermath of punk, The Human League were one of the first British band to start tinkering with (or perhaps that should be building)electronics. The DIY ethic of punk was still there though.

The fact that on this European tour The League were supporting none other that 'The Godfather of Punk' himself, Iggy Pop is further evidence of the extent of the musical melting pot that existed after and because of punk.

The Human League went on to cover 'Nightclubbing', an Iggy track co-written with David Bowie.

Email ThisBlogThis!Share to TwitterShare to FacebookShare to Pinterest
Labels: 1979, The Human League