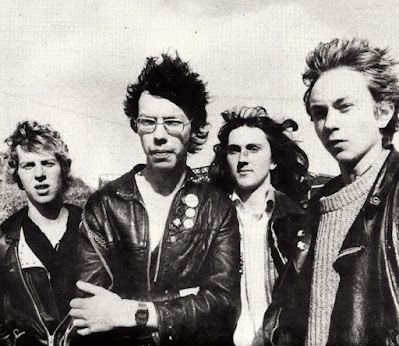 The Subhumans (l-r: Bruce, Dick, Trotsky and Grant) 1982.
Sounds 22nd May 1982
We played in Bristol, right and there were all these so-called hard-core punks roaming around, bloody ten foot mohicans and more studs than a bloody horsefarm, and they're all going, 'Are you the Subhumans? Are you the• Subhumans?' Yes we are. 'You CAN'T be!' "
Dick is the Subhumans' singer, and like the rest of the band he isn't quite your average Sun reader's idea of a Punk Rocker …
Guitarist Bruce and bassist Grant have only about five studs between them, while Trotsky the drummer has long hair, a denim jacket with a Led Zeppelin patch sewn on the back, and ... flares. The singer's gear is pretty punk rock in itself, but the hair, it kind of droops, and there's this strange long bit that hangs over his face like a wet sock, and well ...
Do you think the punks express such disbelief because you wear glasses, Dick?
"It's because I wear glasses, because Trotsky's got long hair, because Bruce has curly hair, because Grant's got that hair… They think if you don't look like a hard-core punk you can't be a hard-core punk
band."
Rising triumphantly out of the ashes of the Stupid Humans, Audio Torture and the Mental came The Subhumans. The current line up has been together since June 1981.
The Subhumans are becoming very popular. They've released two EPs on Flux Of Pink Indians' Spider Leg label - 'Demolition War' and, more recently, 'Reason For Existence', which at this very moment is steadily climbing the indie pop charts.
They are not an ordinary punk rock group. The music available here is special. Deadly, shimmering, growling guitar, teasing, stunning musical dodges and chases, their name is deceptive. Sometimes the
Subhumans stray into the more familiar territories of punk, pushing the four chord bashes too far, for too long, but this is unusual. On most occasions when they opt for thrash, they'll weave and twist around that basic framework, add ever so subtle, mesmerising little sounds, decorate and build upon their song, and come up with something new, something fresh, and something exciting .
Yet it's still punk - Subhumans punk . . .
Are you aware of your growing reputation and street credibility? ..... " No, tell us about it!"
Dick: " Well, I'm getting a lot of letters, because I put my address on the back of the first EP thinking, oh great, I'II .get some letters for once! Now I can't stop them, and I'm months behind in answering them. A lot of people must think we're a bunch of c***s, but I do eventually get 'round to answering them, I mean l 'must have had 300 this year."
What' sort of letters do you get?
"Most of them are just three lines saying, please send me some info, thought the EP was great. You get the occasional people who write long letters, and out of those there's the ones who tell you they're doing fanzines, and those that make it worth it really, the ones who offer constructive criticism ."
What's the reaction been to ‘Human Error', the fiery reggae based number on 'Demolition War'?
Bruce: "We've only had one person who said they didn't like it. We were a bit dubious to put that on the first EP, or to put it anywhere, because it's slower. We thought it would be best to put it on the first EP because if we put it on the second it'd look as though we were copping out."
Reggae was very cool with punks at one time.
Dick: "Yeah. I don't like it myself, this so called-real reggae bores me to tears, the stuff John Peel plays all the time. "
Bruce: "I like reggae a lot." 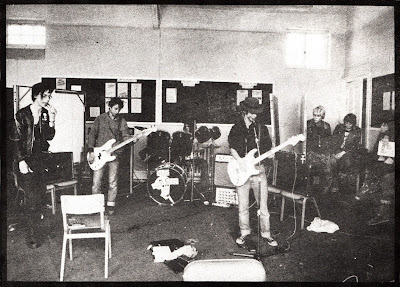 How did the connection with Flux come about?
Dick: " Well ,'when they were starting up Spider Leg , they heard our three tracks on the 'New, Criminals' compilation tape, and they thought we were good enough to be put on a record.
" First of all we intended to record 'Demolition War' on a cassette recorder and make it into an EP, but they said they'd pay the money back if we went into a studio, so we did that instead."
You've got strong views about keeping prices low, haven't you?
Dick: "Yeah, we intended to do an EP with Small Wonder, but just at the last moment I said can you put it out for 85p? They said no way, it has to be £1 .05, which isn't so much their fault, because they've got a lot more overheads to see to than a small, totally independent company like Spider Leg."
The Subhumans are different. They sing of things most punk bands wouldn't even consider
singing about, like ... Peroxide girl with a false ID/Lost and lonely she can't see/ Peroxide hair and burnt out  eyes/ Blinded by so many lies … ' Peroxide'.
Are you slagging off peroxide?
Dick: "Not at all. No, it's just a made-up fantasy type story about this girl who dyes her hair and it goes wrong. Instead of going on her hair it goes on her face and she f** *s herself up. "
But the majority of punk bands wouldn't dream of writing something like that...
"Not nowadays, no. Because it's not considered hip at all. It's just a fun number, we've got to have some fun numbers."
Bruce : " I worked it out the other day. We've got 27 serious numbers and 20 fantasy numbers."
Is 'Cancer' a fantasy number?
Smile - it's impossible / I – I feel disposable / You laugh and it f"'**s me up/ Fag? Has he woken up? - 'Cancer'.
I thought it was an antismoking song, but as you all smoke it obviously isn't.
Dick: "No, it's ... imagine the situation where this bloke who's got cancer is sitting, down at work in his lunch break with his mates, and he's feeling depressed because he knows he's got cancer, and there's
these blokes trying to cheer him up by giving him fags. People think that fags actually cheer you up and, er, more so than, ..em .. . "
Bruce: " Sweets."
Dick; "It's like ' Drugs Of Youth', it's just a statement. It's not pro-drugs or anti- drugs .. . "
But how do you feel when you see punks sniffing glue?
Dick: "I don't like glue".
Bruce: "We don't agree with glue."
Do you deliberately try to bring something fresh to the confines of punk?
Dick: " No, you can't do it deliberately. You just come up with what you do, and it either works or it doesn't work …”
Bruce: “We try to keep the music tight, and interesting…. We’ve got a lot of bash-bash stuff, but we also put lots of little interesting bits in it.”
Grant: “Bash-bash with a difference….”
In a musical area that grows simultaneously larger and more unexciting all the time, the individuality,
sparkle and strength of the Subhumans is a rarely experienced treat. Does the sheer predictability of most of today's punk groups depress them?
Bruce: "Oh the whole scene depresses me actually, musically it depresses me. Because they all say they don’t want anything to do with politics …"
Dick: “Yeah, that is copping out if You ask me."
Grant: "What's wrong with it?"
Dick: "Well . . . it's just the way they stress it. I mean certain bands, I've read in fanzines how they say all these bands who write about politics are idiots, that sort of crap."
Somebody once described you affectionately as 'hippypunks'.
Grant: "I can't see anything wrong in that."
Bruce: "Hippies are passive people, aren't they? Nice people hippies, always got on with them."
Along with the refreshingly sensible anti-war / bomb lyrics printed on the sleeve of 'Demolition 'War', there is a long complicated and utterly incomprehensible mini-essay. What are they getting at? Dick explains it to me ...
"Ah yes, I remember writing this."
Surely it could have been made a lot clearer.
"Well of course it could have been made clearer, it's just that I love writing long complicated sentences like that!" (Uproar).
But seriously, do you think any of your fans understand it? I didn't.
Bruce: "I didn't either. He's got an 'A' level in English, the bastard. He knows all these long words we don't understand."
Dick, do you ever worry that like some bands get labelled 'Crass-band' you'll find yourselves labelled a  ‘Flux-band'? " Well yeah, quite a few people have lumped us in with Flux and Crass . I'm not particularly worried about that, because both bands are good. I mean it's better than being called an Oi band or something like that, which obviously we ain't ... I think we're a 'Subhumans-band' .
Unpredictable, unpretentious, thrilling and new. The singer is perfectly correct.
Barriers will be broken.

Email ThisBlogThis!Share to TwitterShare to FacebookShare to Pinterest
Labels: 1982, The Subhumans