In this interview in the 24th February issue The Stranglers reflect on 15 years in the business from within the confines of the 'Top Of The Pops' studio in London. 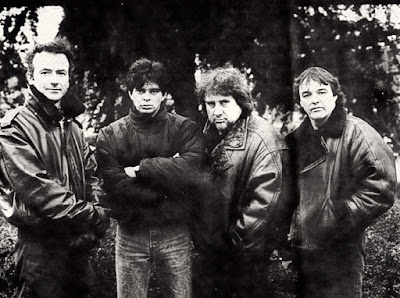 Does Hugh Cornwell still wake up every morning, fling back his crisp sheets and think, 'Wow! Another day!"?

"Oh yeah! I used to go out running every day, but now I have to go on a bike, cos of my back. Very first thing, I go out for a bicycle ride, whatever the weather - rain, snow, sleet, wind, gales, everything. If I can do that, I've achieved something, even if the rest of the day goes completely wrong. I stay healthy. I don't take any drugs, I get plenty of sleep, and I eat well."

The head Strangler fixes me with the gaze of a man who never suffers fools. 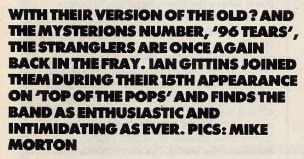 Backstage at "Top Of The Pops", where The Stranglers are waiting to play their bright and breezy new chart hit "96 Tears" to the nation, four men are slumped against a wall. Jean-Jacques Burnel is looking at me, lazily weighing up whether to play let's wind up the joumalist. He decides not to bother for now. Dave Greenfield is fascinated by his book of logic puzzles, Jet Black is busy staring at the floor. And Hugh Cornwell, bent over his unplugged guitar, is recruiting Jean-Jacques' help to try and remember the chord changes to "Something Better Change"; 'Was it an E here, or an E flat?" Slowly, they get there.

You still wouldn't monkey with The Stranglers. Not if you value your teeth. The years haven't been totally kind to them; Dave Greenfield and the portly Jet Black now look like the sort of beefy blokes you'd call in to fix your plumbing. They haven't matured well. But Hugh Cornwell is still lithe, tanned, primed, a perennial alert gleam in his eye. And the chunky Jean-Jacques Burnel, with his roguish sense of fun, his cocky charm, the karate kicks he's practising around my head in the dressing-room .... the only word you can really use to describe Jean Jacques is dangerous. He could go off at any minute.
So The Stranglers, old lags that they are, are back in the charts again. And it's no big deal. "96 Tears", a
cover of an old standard by? And The Mysterions, is a pleasant nothing, a spindly doodle of keyboard drawn over a pounding beat, neutral and inoffensive. And later, pulled into the busy tiny studio to play for the cameras, The Stranglers show themselves as in control as ever. Serenely on top of the chaos around them, they mime effortlessly, look away from the camera, Pout and play like their thoughts are a million miles away.

They carry it off with that eternal air of vague, concealed malice, like the veteran hacks they are. And looking at them, I realise this could be absolutely any year, from 1975 right through to 1990. The Stranglers just never want to go away.
Hugh Cornwell used to be a teacher, back in the distant past, and it shows. He's still got the manner of a
pedagogue. As I grill him about The Stranglers, he's patient, polite and oddly formal, brow knitted, head
tilted on one side. Any slack or lazy inquiry on my part gets a sharp verbal rap on the knuckles. The years have also given him a noble, detached air of dignity.

"I feel old all the time! I felt old when I started playing music, when I was 13. The number of life's experiences that I've been subjected to, it's very hard not to feel old the whole time. Life is very hard, you know. Living is a very difficult business. It's a totally random thing, people who think they're in control of their lives are fooling themselves."
So do you ever feel The Stranglers are old hat? You ought to jack it in, and go home? Hugh looks not
totally enamoured of this question.

"I've got used to the fact now that we're Punkasaurus Rex, this dinosaur that's still around from those days. But I look around me, and all the other bands from that period are reforming, they jacked it in
when the going got tough but now they're back! This is the period of the Reformation! But they've got bills to pay, you know, that's fine. And I think people have got too much of an airy-fairy idea about pop music.

There's no more validity to what we do, after all, than Kylie Minogue. She enjoys herself, same as we do.

And the strange thing is, y'know, that The Stranglers are in serious danger of becoming hip now. It doesn't bother me, mind. I'd just laugh."
We don't want people having a laff and paying their bills though, Hugh. Artists should be out on a limb,
striving, being torn apart ...

'Well, we're commercial artists. Everyone who makes records is doing it to make a living and the idea is to sell copies. I don't know anyone who makes a record hoping that nobody buys it. It's madness. Anyone who says they're doing it for their art is lying."

So you're never trying to touch our hearts?

"You can't do it in the world of records. The very nature of it is that you just sell copies."

Here is Hugh Cornwell talking about punk rock.
"The idea that punk swept away all the old dinosaur bands was a romantic thing for the history books. Punk was thought up by about four people: Malcolm Mclaren, Dai Davies, Andrew Logan the artist and
Bernie Rhodes. They all sat around for a couple of evenings in the mid-Seventies and thought, 'Sod all this, let's create something!' And that was it! All that stuff about the voice of rebellion was a load of
rubbish. It was a scam, and luckily it was so original it got its own life." 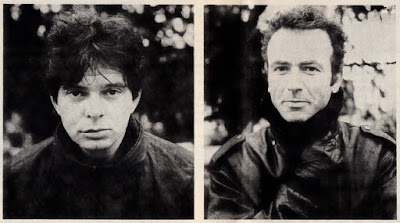 Did you feel a rebel, or a scamster?

"Actually, I did feel a bit of a scamster, yeah. I didn't know exactly what scam was going on. I wasn't sure what it was, but the fact that it had record companies jumping round like they were on hot coals ... I'm not stupid, I knew that for them all to be caught with their pants down, there was a spectacular scam going on. They're scammers themselves, so it had to be a very clever one."

"No! We seemed it when we played, because we had this tremendous bitterness and resentment that no one liked us. Then we finally got our own audience, but the resentment transferred into our playing and became a style."

Is punk funny to look back on?

As The Stranglers walk round the "Top Of The Pops" centre, the question they get asked the most, is, 'How many times have you done this?' After some casual contemplation, they settle on 15 times. One for every year. It's got a nice logic. Back in the dressing room, Jean-Jacques Burnel, the restless soul who's always scouting for trouble, is telling me why The Stranglers have never been press darlings.

“It's because we've never been some Trotskyist, militant, one-legged, lesbian, save-the-whale right-on group, and never pretended to be and we're still successful! So all the papers hate us for that."

And Hugh Cornwell is saying how he'd have loved to have been a painter.

"I respect painters because when they have an idea they pick up a pen, or brush, or charcoal and draw on a surface, and it's direct. I painted a lot at school and got A level art grade A with distinction, but couldn't go to art college because I'd taken all the wrong subjects, I'd taken all the sciences. I was screened and they said I had the wrong combination. So I never had a formal training, but I'm pleased now, because having seen classically trained musicians, it just stunts the power of growth."

But education can give you ideas, inspire you with other people's spirit. Reading Yeats or Hopkins can show you how high words can soar. You don't have to be stifled.
"But these musicians who go to college and learn Chopin, Debussey, all those different composers, you
put them in a studio and say, 'Play something' and what do they play? They play a set piece, something
somebody else has written! Or if they play their own stuff, it's totally derivative."

Yet when The Stranglers started, you'd heard Elvis, Bill Haley, all rock's history.

"I'm not advocating working in a vacuum. You can't live isolated from music, sure. But when we started, we were fighting a lot of opposition. Everyone we met was against us! We'd never be able to go back and play the same place twice, because we d finish a gig and some guy would come up and say, 'You lot are evil, you're not playing here again!' And all we'd done was play a few songs we'd written!"

And you never felt evil?

'We never felt evil. The most we felt was slightly ... . mischievous."

The mischievous Meninblack's catchy new single, "96 Tears", will be in the Top 40 for five weeks, and won't kick over any statues. Lt may help Hugh Cornwell buy a few barrows of gravel for his gravel path. Like he says, it helps to pay the bills. And it helps him to wake up each morning feeling even better.

"Playing a concert and nobody turning up."

And his biggest ambition?

"I'm a very ambitious person. I've a load of things I want to do. Some people are frightened of ambition. I'm not. It just means hard work and being a success."