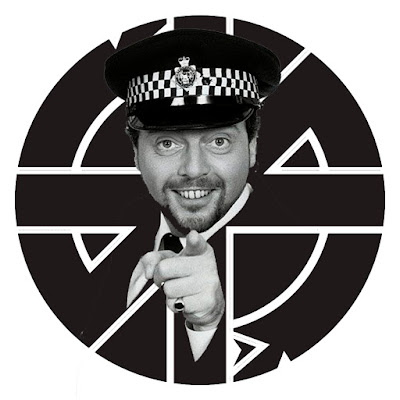 CRASS have been uncovered as the perpetrators of a bogus tape of a telephone 'conversation' between Ronald Reagan and Margaret Thatcher.

The tape was originally circulated last summer before the General Election and was claimed to be a recording of a crossed line between the two leaders. Needless to say it is not complimentary to either statesperson.

During the course of the 'conversation' Thatcher replies to Reagan's question about the Belgrano by saying: "Argentina was the invader. Force had to be used now, punishing them as quickly as possible.

And later in a discussion about nuclear strategy Reagan says: "If there is any conflict we shall fire missiles at our allies to see to it that the Soviet Union stays within its borders."

Most newspapers recognised the tape as a fake but the Sunday Times attributed it to KGB propaganda a couple of weeks ago and last Sunday's Observer took considerable delight in tracking the tape back to Crass' HQ in Essex.

Invoking the spirit of one of Reagan's predecessors, George Washington, they explained that the tape had been put together from TV and radio broadcasts overdubbed by telephone noises.

They justified their actions by saying: "We wanted to precipitate a debate on the Falklands and nuclear weapons to damage Mrs Thatcher's position in the election. We also did it because of the appalling way Tam Dalyll (almost the only MP to raise any awkward questions over the Falklands affair) was treated over the Belgrano debate in the House Of Commons.

"We believe that although the tape is a hoax what is said in it is in effect true. We were amused and amazed that the tape had been attributed to the KGB."

Email ThisBlogThis!Share to TwitterShare to FacebookShare to Pinterest
Labels: 1984, Crass