OK so you have had my opinion for what it is worth, but what did the professional music critics make of the album.

Surprisingly, New Musical Express did not pan it and neither did Sounds. However, the most damning review could be found in the pages of the teen publication Smash Hits who one would have been expected expected to be more receptive of the pop sensibilities of The Stranglers in 1990. 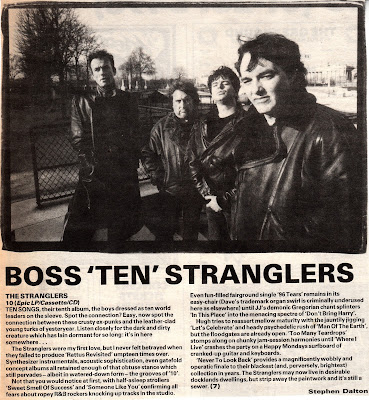 THE STRANGLERS
'10'
(Epic 466 4iJ3ICD) ***
THESE ROCK ratti have long since said, "F*** off, mate" to their classic 'Norvegicus' brand boot-boy bass assault and cat molesters' sense of etiquette. Nowadays The Stranglers simply offer a good time wiv no questions asked. Gone is the Strang und Drang, replaced by a ruff tuff breed of pub rock. This is no longer life or death for this crew. It's a job, innit?
JJ and Dave Greenfield have been marking time with The Purple Helmets' goodtime primal rock vibe
and here the rest of the band hop aboard the wagon. Tasty boogie with all the trimmings is the order of the day. Christ, after 'Sweet Smell Of Success' opens the account with some FYC horn honkin', we get 'Someone Like You'. It could quite easily-fit in the Chas 'n' Dave song book. To ensure rub a-club compatibility they follow with an old favourite, ? And The Mysterions' '96 Tears'. A great version, it has to be said.
Undemanding, mildly cantankerous and as laid back as hell,'10' is the sound of four seasoned pros cracking a few tinnies and knocking out a slice of vinyl for God knows what reason. The cash, force of habit? It's often mediocre, but there's something undeniably likeable about '10'. In a rare moment of enthusiasm they even muster the effort for one great song  'Where I Live', which houses the classic Strangs lines, "I got two big balls/ A cap and bat/And I play with them all the time". Roy Thomas Baker
produces. Dead hip is Roy. The Stranglers just don't care.
Roy Wilkinson
Record Mirror 10th March 1990
THE STRANGLERS
‘10’
EPIC
As its title suggests, this is The Stranglers' 10th studio LP, a fact that will make those of us who remember their days before Clint Inspiral Carpet hijacked Dave Greenfield's keyboard sound, feel our age. It all worked out quits in the end, though, as the Inspirals included '96 Tears' in their set long before The Stranglers hit the charts with it.
Sadly, perhaps, it's by far the spunkiest moment on this occasionally flabby collection of pop, soft rock, downright weird and more typical Stranglers' fare. Confusingly the band's own ‘Too Many Teardrops' and 'Someone like You' come a little too close to the current hit for comfort.
'Man Of The Earth' kicks the superior side two off with a more vintage pop roll that betrays the band's cosier lyrical approach, 'Wife & Kids', 'Wicker Chair' etc. Similarly, JJ's 'Where I live' is real rock star relaxation stuff, almost XTC-ish in execution, though a great pop song for all that.
For the weird, check out the fuzzy-headed, almost Plastic Ono Band sounding 'Out Of My Mind' and the funeral march of 'In This Place' complete with inebriated, operatic vocal apparition. On '10' The Stranglers are beginning to show their vinyl age. A great sleeve and a couple of great songs cannot hide the fact that rather than 10, this collection only merits
•• 1/2 Andy Strickland
Smash Hits 21st March 1990
THE STRANGLERS: 10 (Epic)
"10" Is an odd name for an LP isn't it? Why "10"? Is it because there are ten rollicking rawk-a-go-go
tunes on the album? Possibly. Is it because this is the Stranglers' tenth so-called "studio" LP? More than likely. Weeeel ... If "96 Tears" was your kind of thang and drove you delirious with its understated irony
and finger-clicking beat (or something), then "10" will have you wiping away tears of happiness. If, however  you think The Stranglers' "sound" bears a disgraceful resemblance to hoary rock'n'roll stalwarts Status Quo then you know what to do don't you? Go and buy four copies of the Shakey single instead.
(1 ½ out of 10) (there's a guitar solo which is pretty funny)
Miranda Sawyer
Posted by Musky03 at 20:47