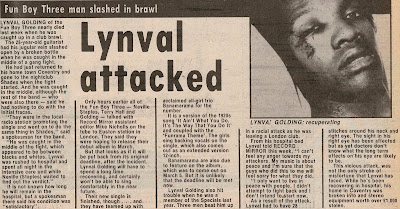 Report of the attack that appeared in Record Mirror 16th January 1982.

I have recently acquired quite a lot of copies of old Record Mirror's and I am more than happy to while away a few hours perusing the singles and album reviews from way back when. But on a much darker note this piece reminded me of what happened to Lynval, guitarist of The Specials and Fun Boy Three man in early 1982. The guy was attacked and his injuries were such that he was lucky to survive. It happened in his home town of Coventry, a multi-cultural city that he and his six fellow Specials had given some meaning to in those dark days of the late '70's/ early '80's.

That band and in particular that man did so much, and indeed continues to do so, to promote the bloody obvious sense of racial harmony. Through his music and his very being he stands up to racist morons. I had the pleasure of meeting him on a couple of occasions and I have never met someone so positive, lively and enthusiastic about his music and what it means. He is a lovely, genuine bloke.

Black Lives Matter (yeah and All Lives Matter and so on and so forth....) everywhere but in particular in the US, where Lynval now resides, things are out of hand.... we shall see what happens in November, but it seems right now that the US is reliving the late '60's. It's all very disconcerting.