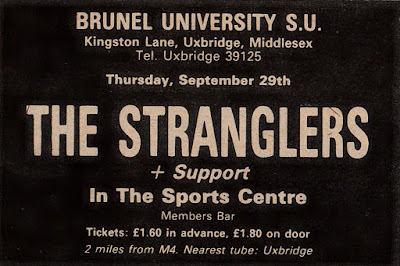 43 years ago The Stranglers played Brunel University, sadly 11 years prior to my arrival when I chose to while away four years of my life amidst some of the most brutal of Brutalist architecture to be found in Britain. The band had played the Student Union in May of that year, but this time the runaway success of 'Rattus' had propelled them into the premier division of the new wave such that they could fill out the much larger Sports Centre.

Leigh Heggarty, guitarist of Uxbridge band The Price and now guitarist with Ruts DC was there. When asked for his recollections of the gig Leigh gave me the following:

Wire supported - I know I should be saying how brilliant they were (probably while using words like ‘stark’ and ‘minimal’) but I can’t remember too much about them, other than a school mate (not much of a mate really) of mine didn’t like them. Mind you, he was a pillock then, and is no doubt a pillock now.

The Stranglers had looked pretty scary on Top Of The Pops, but that didn’t prepare me for four gangland henchmen banging on about ice picks, barley fever (whatever that was) and crimes against the soul while looking as though they’d all just been in a riot. There was a fight (obviously) so the bass player offered them all out (obviously) and the whole thing was both utterly terrifying and absolutely brilliant - which, if you think about it, is what rock ‘n’ roll is all about. Well, what it should be all about anyway."

The closest I got to this particular gig was to locate the back copy of the student newspaper 'Le Nurb' (Brunel backwards.... zany students eh?), that advertised the gig. 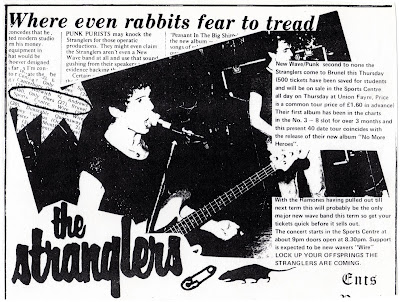