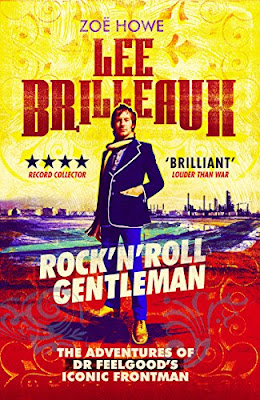 I have just finished an excellent biography of Feelgood frontman Lee Brilleaux. 'Rock 'n' Roll Gentleman' is written by Zoe Howe who has great and far reaching connections within the Dr Feelgood camp and as such the book offers deep insights into the character of the charismatic Mr Brilleaux from all of the right people including his wife Shirley and his kids Kelly and Nicholas. Original members Wilko Johnson, John B Sparks and The Big Figure all contribute as do members of the fluid line up changes that occurred throughout the '80's and '90's. Of course the story of Lee Brilleaux would be only half told if the influence of Canvey Island did not feature large in the book. Luckily, fellow 'Thames Delta' musicians such Larry Wallis, Will Birch and Lew Lewis are on hand to verbally paint the backdrop Canvey canvas with their contributions... the early gigs, the break out into wider Essex and London as well as the wild nights in the Admiral Jellicoe pub and 'Feelgood House'.

Sadly, I never saw Dr Feelgood with Lee at the Helm, but from an abundance of footage and audio material it is possible to gain an appreciation of just how incendiary the band were. The debate around the origins of punk will continue until the last punk has gone to the grave. The arguments for a single origin of punk east or west of the Atlantic should be left to the Rotten's and Hell's of this world. I think that the real answer is that punk rock evolved from what was happening in the early to mid-70's both here and over there. There can be no doubt that the 1977 UK scene as we know it took much from US garage bands.... The Damned loved MC5, Gaye Advert loved Iggy whilst a hearing of the first Ramones album inspired as many teenagers to buy a cheap guitar and form a band as did the first exposure to the Sex Pistols. And then there was the music from the Delta.... The Thames Delta. I don't think that the contributions of Eddie and the Hotrods and Dr Feelgood can be underestimated when it comes to laying the foundations of the punk Year 0. As purveyors of no nonsense Rhythm 'n' Blues music both bands were sticking two fingers up at a music scene that had become turgid and over-indulgent. In that sense whilst Richard Hell and The Ramones offered up the visuals of punk (oh I can hear Johnny moan as I type this) the attitude of the UK punk scene came from closer to home.

The stage to audience projection of Dr Feelgood was a brilliant accident. The intensity emanating from a demonic used car salesman on vocals and 'gob iron' coupled with a crazy-eyed guitarist engaged in a personal struggle with a possessed telecaster is mesmerizing.... and like much of the punk that followed completely at odds with all other bands of the day. Throw into this mix a bit of Music Hall theatrics courtesy of the Kilburn's Ian Dury and bingo..... Sex Pistols and The Clash!


Having laid the foundation stone for this new music Lee was fully aware of the fact that Dr Feelgood and their ilk would inevitability be swept away on the tsunami of punk's first wave. In fact Lee toyed with the new punks, appearing on stage on occasion with an oversize safety pin skewering his torso!

It was perhaps Lee's dogged adherence to R'n'B that did see Dr Feelgood survive punk, albeit as a band back to playing smaller venues than a few years previously..... they did enjoy single chart success at the beginning of 1979 with the Nick Lowe/Gypie Mayo penned classic 'Milk and Alcohol'. The end of the decade were to bring more challenges to one of the business's hardest working bands. The early '80's ushered in the age of electro-pop and to say that synthesizers were an anathema to Lee would be something of an understatement. When asked by journalist Charles Shaar Murray his views on German electronic pioneers, Kraftwerk, Lee responded with 'I thought it was a load of ice cream vans gone wrong!'.

Tragically, the Great landlord in the Sky called time on Lee when he was only 42 years old.

Last year fellow Essex musician and proto-punk Barrie Masters of the Hot Rods was awarded the 'Living Legend' accolade at the 2019 Vive Le Rock Awards. How great would it have been to see Lee Brilleaux get one too! The punks would have approved.

Let's leave the last word to the man himself.... in the following interviews.