Pressure - A Play by David Haig 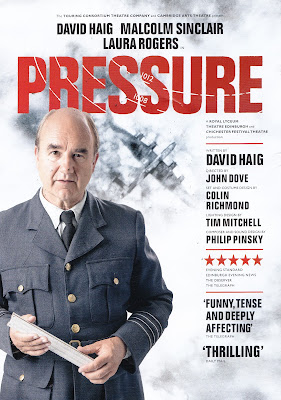 Last weekend Gunta and I travelled the short distance to Cambridge and the Cambridge Arts Theatre to see a play written and starring David Haig. A true story depicting the tensions between the teams of British and American meteorologists as they maintained a constant watch over the weather systems in Northern Europe in order to try to forecast the weather on the planned D-Day date of 5th June.

The British team were led by James Stagg, a dour, intense Scot, whilst his US counterpart in the 'Allied Meteorological Unit' was one Irving P. Krick. The two men disagreed fundamentally of the nature of forecasting. Stagg insisted that forecasting had to be considered in 3D, taking into account the  impact that upper atmosphere weather systems and the Jet Stream had on the weather closer to the Earth's surface and moreover by dragging surface weather fronts around the globe weather conditions were created that could not be accurately predicted on the basis of observed historical weather patterns that Krick largely put his faith in. Nowhere was this unpredictability more at play than in Northern Europe.

So it was against all expectations that despite uninterrupted good weather in the preceding weeks that Stagg predicted violent storms for 5th June and advised that the Overlord should be postponed. Nevertheless, he was right and the 5th was to witness such terrible conditions in the Channel that the planned invasion would have been a catastrophe and many thousands of men would have undoubtedly drowned before reaching the landing beaches. The poor weather was predicted to be poor for the day's following too, meaning that the next opportunity (coinciding with the required tidal situation would have been on 19th June. However, Stagg's meticulous analysis of the barometric data coming in from naval shipping in the Atlantic identified a gap developing between storms leaving an area of high pressure in the Channel that would potentially create a window of calm and therefore invasion potential on 6th June. On the basis of his work Eisenhower ordered D-Day to commence after a delay of only 24 hours. Stagg was right and the largest invasion in history took place in conditions suited to the requirements of Army, Navy and Airforce.

The play was incredible tense, and the idea of pressure is relevant throughout. The interaction between the characters playing Stagg and Eisenhower was just fantastic.

As a final point to mention, had the invasion been delayed to 19th June, this too would have spelled disaster as major storms blew up in the Channel on that day that persisted for several days. The storms permanently wrecked the US 'Mullberry A' harbour at Omaha beach. Email ThisBlogThis!Share to TwitterShare to FacebookShare to Pinterest
Labels: Pressure