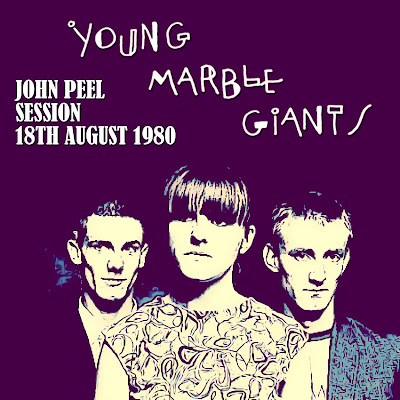 Well, I am not known for being particularly adventurous on this site, but the search for the more alphabetically obscure bands has lead me to Young Marble Giants. I had heard of them by name but never before had listened to any of their material. Harking from Wales, they recorded one Peel session in the summer of 1980 that showcased their stripped down, minimalist instrumentation that was really all that was needed by way of accompaniment to Alison Statton's striking vocals. I rather like it, as John Peel himself was wont to say!

Post punk was perhaps punk's greatest achievement. The brash, untrained and unharnessed boldness of it swept away all previous rock 'n' roll conventions and in doing so created a black canvas for so many bands inspired by punk but full of new ideas, new instruments and a whole new perspective on what sounded good. It is for this reason that much as I love the bands of '77, it was the material that was released in '79/'80 that represents a pinnacle of the British music scene not seen since the mid '60. Those original punk bands who has survived the maelstrom of 1977 had evolved (not least through being more at ease with their chosen musical instruments!) to produce some fantastic music... Buzzcocks, The Clash, The Stranglers and The Damned. In turn, like just slightly older uncles the looked down on the new bands that were coming through that sounded completely different, but with clear influences.

Anyway, enough of this, give them a listen.