A strange day for many, B-Day, so an evening in Cambridge in the company of Back to the Planet, Radical Dance Faction and Culture Shock was a pretty good escape. I was aware of the scene that existed in the mid to late '80's that combined punk, ska and dub styles in material that was very political in nature. I came to Culture Shock early on through Dick Lucas's former band, The Subhumans. Radical Dance Faction I had seen once before at Fountain's Mill in Uxbridge in July 1990. The event then was an AIDS benefit, for that was the issue of the day and Cheap played on the bill too that afternoon.

I have seen Culture Shock on just one previous occasion when they played T-Chances in Tottenham with The Mob a few years ago. Prior to that all my efforts to see the band were thwarted.

I traveled across town to Fulham, on 2nd December 1989, with my mate Stuart in the hope of seeing the band's final gig at the Greyhound, but rather than showing up at a run of the mill gig we walked into a riot. Needless to say that the gig did not go ahead. Attempts to get tickets for their gig the following month at Queen Mary's College were unsuccessful and so I had to wait 24 years to finally see them. 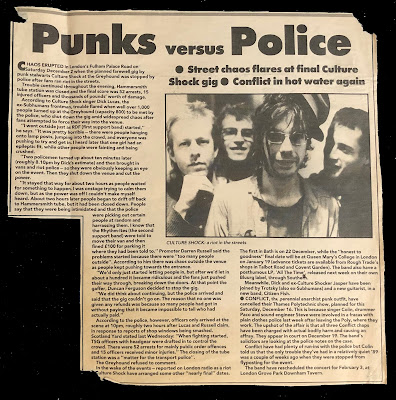 Now a full 30 years on from the Fulham fiasco I was seeing Culture Shock in far more pleasant and relaxed circumstances..... i.e. no trace of the Met!

First on the bill were 'Back to the Planet'. The name I was familiar with me from back in the day, but I was unacquainted with their music. And what fine music it was, I was very impressed I have to say! 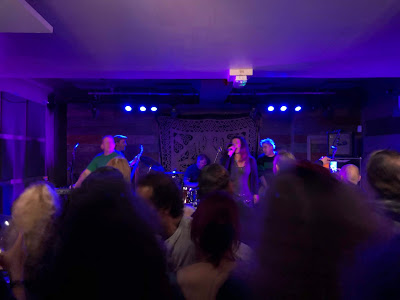 Back to the Planet
Portland Arms, Cambridge
31st January 2020

Next up were 'Radical Dance Faction' who as mentioned above I had seen many years ago. I thought that they were good but I preferred 'Back to the Planet'.... but I am indebted to their frontman Chris Bowsher for reasons that I will relate shortly. 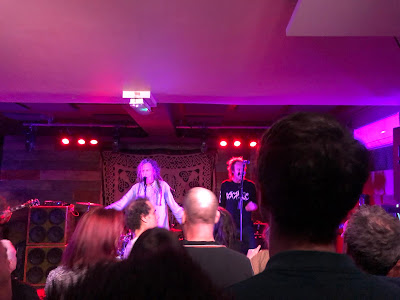 Finally, at 11pm!..... a very late gig for this little old man! Dick and Co. took to the stage. Mr Lucas was very vocal about the day's events. The band's stage time in fact tallied with the official time of the UK's departure from the EU.


'Mindwash' and '10 percent off'
Culture Shock at the Portland Arms, Cambridge
31st January 2020.


Halfway through Culture Shock's set, I let myself down. As the video makes clear, the venue was heaving and it is small. So, for the second half of the band's set I found myself a niche by a side door of the venue. With a new pint in hand I relaxed and leaned back.... all was well for 15 or so minutes.... until the doors that I was propped up against burst open allowing me to exit the venue much like one of 1st Airborne over Arnhem...... backwards. Down I went in a scene that must have been reminiscent of Del Boy going through that bar hatch. Worse still, as I mentioned I had a full pint which I managed to tip over my own head once a descent angle of 50 degrees had been attained! Worserer yet, the floor of the venue was about six inches higher than the external road surface so my fall from grace was even more painful than it could have been. I landed on my left buttock which is still aching as I write these words.

At this point RDF's Chris came to the rescue and helped this beer soaked and very embarrassed punter back to his feet... thanks Chris!

But overall, what a positive night.... it's great to know that despite hearing bad news on the TV night after night there is something of a united resistance against the bollocks.

Email ThisBlogThis!Share to TwitterShare to FacebookShare to Pinterest
Labels: 2020, Back to the Planet, Culture Shock, radical Dance Faction