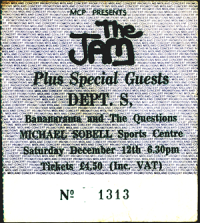 So, in this post I include the sound recording of the gig reviewed in the previous post. Please note that the file states the date to be 13th December but this is incorrect. They did play at the same venue on Sunday 13th but with different supports.

My thoughts for what they are worth.... Well, having seen pictures of the interior of the Michael Sobell Sports Centre it is clear that the venue is horrendous (anyone remember when The Stranglers played Crawley Leisure Centre on the '10 Tour', just horrible!). This will and indeed does play havoc with the sound, Early in the set, you can almost feel the cold as the Jam echo away in that cavenous space. But as the temperature rises things improve and as the reviewer says The Jam are very good indeed.

I would take issue with his comments of the adoration by the fans of the band as icons. The fact that soft drinks were sold across the bar is mentioned makes it clear that this was promoted as a gig without the usual 18 plus entry requirement. Hearing 'We Are The Mods!' again puts me in mind of the fact that much of the audience were probably 16 year olds and let's face it at that age who didn't have their chosen band on an unassailable pedestal! 'And I should know, I've followed a few!' as they say in 'The Life of Brian'. He's also rather tough on Weller with an assertion that he is in danger of following his heroes' paths in taking the band down the road to stadium rock. What the reviewer didn't know was far from that being the case, The Jam were now in their last 12 months of existence and rather than take what was undoubtedly the biggest properly functioning band (thereby excluding The Stones and The Who) in the UK to even greater heights, Weller pulled the plug. In changing direction in the way that he did with The Style Council I don't doubt that many of the young mods in attendance on that night flogged their parkas and went in search of a new identity.

But take a look at the set, it's very brave. With the exception of three songs lifted from 'All Mod Cons' the band ignore anything prior to 1979 and there is very much a focus on a new brass infused future sound. 'A Town Called Malice' gets an early airing.... the following month would see it become The Jam's third number 1 single, back in a time when that meant the sale of serious units! More than half of the material from 'The Gift' features, an album that would not see the light of day  for another  three months yet. Only a band extremely confident in the quality of work would do that I think.

I never saw The Jam, it's not as if the opportunity was not there..... they played Brighton (closest to me at the time) not less that four times in 1982! Would I have gone to this gig, despite the shortcomings of the venue? Yes, of course I would!

Email ThisBlogThis!Share to TwitterShare to FacebookShare to Pinterest
Labels: 1981, The Jam