At 11 am yesterday morning cannon and fireworks  sounded to start the annual Remembrance Sunday two minute silence. This year was the same as always, but at the same time a little different, for it will see the culmination of the centennial commemorations of 'The War to End All Wars'.

It was several years ago that the last veterans of that conflict shuffled of the parade ground and so this is now the last big one, or perhaps  the big one oh oh commemoration. 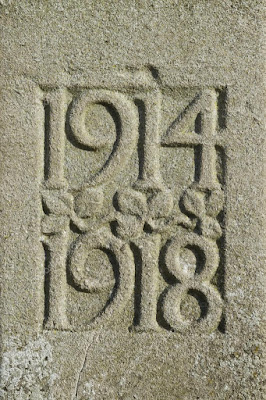 Personally I have been fascinated by the Great War since I was at school, as I was lucky enough to do the 20th Century O Level syllabus that focused on conflict, That set me up for a lifelong interest in history. This is in contrast with Gunta's experience. She had to study The Factory Act and the terms of Gladstone and Disraeli. These subjects ultimately disraelied her interest in history (poor pun I know!).

Meeting up with an old school friend a few months ago we discussed another old mutual friend who had expressed surprise about my posts on social media relating to my involvement in WW2 remembrance activities, Association meetings, wreath laying and the like. This surprise stems from the fact that' as a vocal individual at school at times when our armed forces were engaged, I questioned the whys and the wherefores. I had nothing but disdain for conflict and war. In that respect nothing has really changed, but perhaps the passing of 35 years has left me a little more rounded (physically more rounded without doubt!) with my views.

I have never been really interested in military strategy, battle plans and the big picture generally.  However, the testimony of soldiers describing their personal experiences of war totally absorb me. The thoughts and opinions of ordinary men, plucked from farms and factories, committed to paper is what it is all about for me. The books of Lynn McDonald that featured hundreds of interviews with veterans that described the WW1 experience just gripped me.

For me, as for many others, there is no glory in war, that is a concept long dismissed. Lutyen's Cenotaph in Whitehall remembers 'The Glorious Dead'.... Since it's unveiling in 1920 attitudes towards the Great War have shifted. Post World War 2, many veterans opened up on the realities of the 1914-1918 calamity that has lead to a huge change in our understanding of that war and the concept of glory.

As I write this on 12th November 2018, 100 years and one day after the Armistice I am considering what remembrance means. In the last three weeks I have travelled through  Sussex, Essex and Hertfordshire and I have been thrilled to see the remarkable efforts that towns and villages have made to remember the sacrifices that were made at a local level. Tommy silhouettes, wire Tommies, and a perfusion of poppies... painted, stitched, crocheted, fired, forged..... you name it, it is breathtaking!!

So where is this all leading to.... well to return to the idea of what is Remembrance, to me it means trying to reclaim names from weathered memorials and place some context as to how they came to be commemorated in stone. Watch this space.

Email ThisBlogThis!Share to TwitterShare to FacebookShare to Pinterest
Labels: 1914, 1918, The Great War