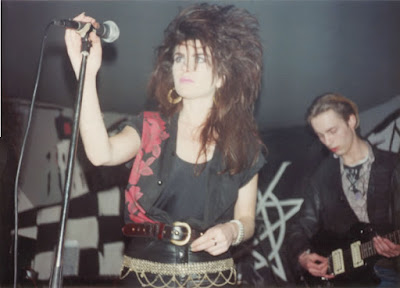 Cleo of The March Violets

Back in '84 Goth was at its peak and Andrew Eldritch and his happy go lucky troupe The Sisters of Mercy were the Royal Family of the movement. The Sisters never really gripped me, although I do intend to upload one of their gigs as a part of this thread.

Loosely associated with that scene but eminently less preposterous than their laugh a minute Leeds pals, The Sisters, were The March Violets. With both bands coming from Leeds, The Sisters of Mercy's own label, Merciful Release, oversaw the release of the early March Violets singles. Unfortunately, I never saw them, but mates of mine did. They played some great songs, but I am sure that part of the appeal of the band for us 15 year old boys was the fact that they were fronted by a rather striking lady called Cleo.

So here is a short blast in the form of a session recorded for Radio 1's Richard Skinner at the end of the year.

Email ThisBlogThis!Share to TwitterShare to FacebookShare to Pinterest
Labels: 1984, The March Violets