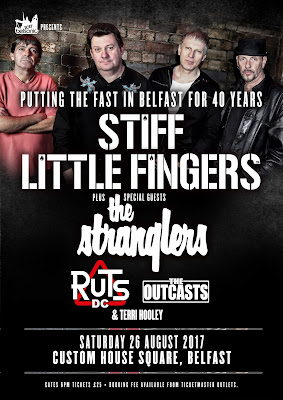 Stiff Little Fingers are one of the lastest popular beat combo's to hit that oh so unexpected anniversary of 40 years as a band and where better to mark it than in Belfast. And what a supporting cast we have. In these times of austerity a bit of forethought has brought together a bill that is worth £30 of anyone's money.

Like so many bands, SLF are another of those that I missed first time around but I was ready for them by the time they reformed for their 'Go For It Again' tour, where I saw them in December 1987 at the National in Kilburn, a gig captured for posterity on the 'No Sleep 'Til Belfact' album. For many years this was the best gig that I had ever seen (only topped in 2009 when I first saw 6/7ths of The Specials at Brixton). For many years my musical world revolved around the trinity of The Stranglers, The Damned and SLF.

I know that Fingers have many detractors, Mully (for reasons that I understand) and Pigeon for example (for reasons I don't understand!) but they have been every bit as vital in recent years as The Stranglers. Perhaps they had their own doldrum period towards the end of Bruce Foxton's time on bass duties, but with the return of Ali, a new impetus came to the band.

This then is my near perfect line up for a gig.... if only The Damned would turn up and play a few numbers.

Also, the latest word on the street is that the surviving members of The Clash are booked to be in Belfast on the same day for a photoshoot!