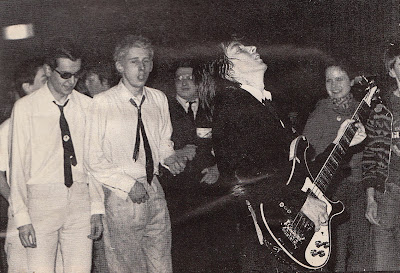 Shane MacGowan & Bruce Foxton in a more sober moment (perhaps!)
London 1977
Here's a recording, originally from Dimeadozen (and for that reason retained in lossless format) and it's an interesting one at that. Recorded at The Fulham Greyhound pub in London at The Jam's annual private Christmas Party in December 1980, one can only assume that every one in the venue is caned!
By late 1980, The Jam were for sure one of the most daring and accomplished bands in the country, but there is little evidence of such proficiency to be found in this handful of numbers. True, Shane's vocals do little to raise the calibre of the entertainment much higher than a sixth-form Battle of the Bands night!
Poor old Dusty Springfield would be turning in her grave if she heard this treatment of  'I Just Don't Know What To Do With Myself' and as for Rolf, well he's got more pressing things on his mind right now.
The band:
Shane MacGowen (Vocals)
Paul Weller (Keyboards)
Bruce Foxton (Bass on 'Heatwave')
Jeff Martin (Bass on 'Sun Arise' and 'I Just Don't Know What To Do With Myself')
Rick Buckler (Drums)
Staveley of TheNips (Guitar)
The Dolly Mixtures (Backing Vocals on 'Heatwave')
FLAC: http://we.tl/JGnDjhXMJO
01. Intro
02. Tuning Up
03. Heatwave
04. I Just Don't Know What To Do With Myself
05. Sun Arise
06. Outro
﻿
Posted by Musky03 at 15:36

Email ThisBlogThis!Share to TwitterShare to FacebookShare to Pinterest
Labels: 1980, Shane MacGowan, The Jam