The Specials Brixton Academy 28th May 2013 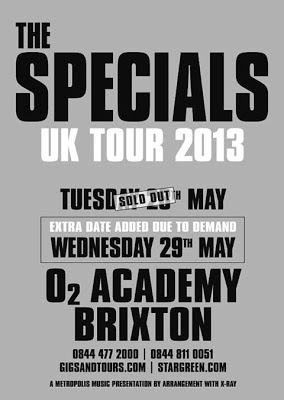 Brixton, 7.30 pm on a Tuesday evening. The Specials are back in town, but I do not feel anywhere near how I felt about the prospect of seeing them as I did back in 2009. The difference is that we are now down to 5 of the band and I anticipate a large Neville shaped hole in tonight's proceedings. This is something that Gunta and I muse over with a couple of pints in the wonderful Trinity pub before heading up to the Academy.

Despite my misgivings about tonight, it doesn't seem to be the case for everyone. The mood is good as we join the queue that trails the length of the building. As we stand in line, a window opens above our heads and a trumpet appears to deliver the start of 'Long Shot (Kick De Bucket)' to an appreciative queue.

Inside the venue, it's geezer central with the bar the most popular place to be. This is one of the rarest of occasions when the queue for the gents is five times longer than that for the ladies.... I suspect lager is to blame!

Don't see any support as we take up our usual stage left position (quite near the front) about 10 minutes before The Specials are due to take the stage..... and then they are here, opening with 'Concrete Jungle'.....

It is true that they are missing Neville. Lynval does his level best, but despite this without Nev the songs lose a bit of depth. But.... but... don't get me wrong here. The Specials are pulling this off. Consummate professionals that they are I get the impression that each of the depleted line up steps up a gear to ensure that that gap is amply filled.

Horace tracks back and forth from the drum riser to the front of the stage like some demented relay runner....
Terry is on fine form getting a few things off his chest ('Luis Saurez, what the fuck's that all about!?', 'EDL, what the fuck's that all about!?', 'Stuart Hall......'
Lynval is just Lynval, fully engaged with his audience and loving every minute of it ('Will someone wrap him up and take him home!' quips El Tel).

.... and above it all Brad sits high on his kit orchestrating the spectacle like a battlefield general (no not that General!)

At last 'Why?' appears in the set ('Don't need no British Movement/Or the EDL!') which runs into 'It Doesn't Make It Alright', a powerful reposte to the disgraceful events of the previous week.

'International Jet Set' and 'Nite Klub' are stupendous. 'Maggie's Farm' gets an outing neatly summing up for many what this band stood for.

With 'Enjoy Yourself' and 'You're Wondering Now' The Specials leave the stage.....


'Why?' & 'It Doesn't Make It Alright'
The Specials
Brixton Academy 28th May 2013
..... will The Specials return to the stage? Who knows. What I do know is that The Specials owe me nothing. In the unexpected turn of events that brought them (nearly) all back together in 2009, they have played some of the most memorable and enjoyable gigs that I have been to and I can't ask for more than that.﻿
Posted by Musky03 at 11:50

Email ThisBlogThis!Share to TwitterShare to FacebookShare to Pinterest
Labels: 2013, The Specials